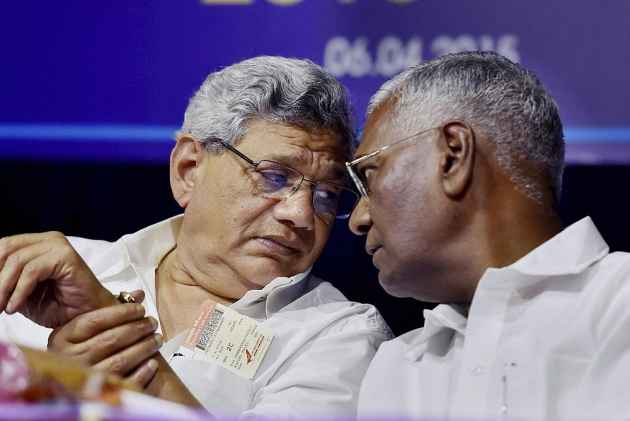 CPI MP D Raja today claimed that he has received calls carrying threats to his daughter, who is a student activist in the Jawaharlal Nehru University, whose students union chief has been arrested on sedition charges.

He said late last night he got a call from a man who spoke in Hindi and asked him why he was "fighting" with BJP and ABVP. He was also "reminded" that his daughter was a resident of the University and she would be shot down, he said.

The Rajya Sabha member said he also received calls from a man in Australia, who claimed to be an underworld don, making similar threats. While some of the calls were from "private" and "unknown" numbers, some of them appeared to be from abroad, he said.

Raja said he has apprised Home Minister Rajnath Singh about these threats when he met him this morning as part of a delegation that went to demand the release of release of JNU Students' Union President Kanhaiya Kumar. Kumar was arrested in connection with an event organised on the campus against the hanging of Afzal Guru.

Meanwhile, CPI general secretary S Sudhakar Reddy took up the matter with Prime Minister Narendra Modi expressing concerns over the security of Raja and his daughter.

In a letter to Modi today, Reddy asked how one can dare threaten a leader of Raja's stature, adding one of the callers identified himself as underground don Ravi Poojari.

"I express my serious concern that there are threatening telephone calls to Comrade Raja that he and his daughter Aparajita, AISF leader in JNU will be shot down if they continue to fight ABVP and RSS.

"One of them claimed he is Ravi Poojari underground don.If there is no security to an MP and well-known senior leader of CPI to whom else you can give security? How dare they threaten a leader of his stature? It is a matter of shame," Reddy said in the letter, which was released to media.

Defending Kumar further, Reddy said the action against the JNUSU president took place as the ABVP, students' wing of BJP, was "frustrated" that the AISF leader defeated them.

Reddy also accused the ABVP of "putting" words in mouth of Kumar to prove him as one who shouted "anti-India" slogans.

The Communist leader stated that following the death of Hyderabad Central University student Rohith Vemula, there was "unrest" across many varsities and likened the current situation at JNU campus to the days of Emergency.

"Politics and administration should be separated. Political vendetta against all those who do not agree with ABVP is taking place with the help of police and administration. ABVP is frustrated as Kanhaiya Kumar defeated them in elections," he said.

Kanhaiya, member of CPI's student wing AISF, was yesterday arrested in connection with a case of sedition and criminal conspiracy over holding of an event at the prestigious institute against hanging of Parliament attack convict Afzal Guru, sparking widespread outrage among students and non-BJP political parties.