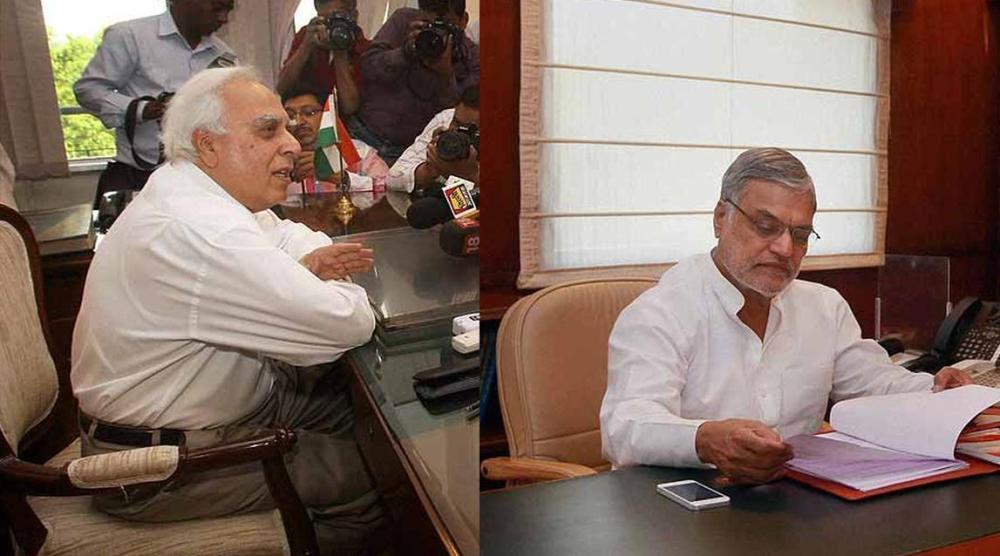 outlookindia.com
-0001-11-30T00:00:00+0553
Road Transport and Highways Minister C P Joshi has taken charge of the Railways Ministry, while Kapil Sibal has been made the Law Minister following the exit of Pawan Kumar Bansal and Ashwani Kumar from their respective posts.

Assuming additional charge of railways, Joshi today said he would try to improve the trust deficit prevailing among the staff of railways rocked by a bribery scandal.

"I will try to improve the trust deficit prevailing among the staff.I will carry out all my responsibilities honestly and in a transparent manner," Joshi, who had earlier also held the charge briefly in September last year, told reporters.

Talking about his priorities, the new Railway Minister said, looking after "passenger amenities is my first priority. The implementation of UPA's Rail Budget proposal is also a priority."

Pawan Kumar Bansal was last week dropped as railway minister in the wake of the bribery scam. CBI has arrested his nephew Vijay Singla and Railway Board Member Mahesh Kumar and others in the Rs 10-crore bribery scam and is preparing to quiz him.

Joshi also interacted with Railway Board Members to take stock of the situation.

With Lok Sabha elections due next year, newly appointed Law Minister Kapil Sibal today said he would strive to achieve objectives in the run up, including making legal procedures help fuel economic growth and appointment of judges through a transparent process.

Outlining his "broad objectives", Sibal said, "Legal processes and procedures should not be an impediment to economic growth, but must fuel it."

He said simplification and transparency of legal processes and procedures were necessary to achieve this objective.

Sibal, who assumed the additional charge of the Law Ministry this morning, also said appointment of judges of the high courts and the Supreme Court should be a through a transparent process which ensures that persons of impeccable integrity and high competence are appointed.

Referring to the legal procedures to boost economic growth, sources later said they could be achieved through not only laws, but also by simplifying procedures and subordinate legislations to reduce hurdles.

They said a dialogue will be initiated with various ministries, including the Finance Ministry, which has already flagged the issue.

On the appointment of judges through a transparent system, the sources said that a "short-term" method could be to change the present system through an "institutional dialogue".

They said the present system was opaque and the long- term method to change it was through a law.

On the issue of various Law Ministry legislations on judicial reforms pending in Parliament, the sources said if the Opposition agrees, then the government will move ahead. Otherwise, it will wait for a consensus to emerge.

A proposal to change the present Collegium system for appointment of judges was pending with the Union Cabinet.

They also said appointment of more judges to reduce pendency of cases was not possible in a short time and a policy would have to be evolved on a long-term basis to achieve the objective.

Sibal is soon expected to lay out a roadmap of detailed objectives which can be achieved in one year.

Thanking Prime Minister Manmohan Singh and Congress President Sonia Gandhi for assigning him the new responsibility, Sibal said with one year to go for the next Lok Sabha elections, he would do his best to successfully carry out the responsibility in the "short time".

He said more needs to be done in the field of legal education in terms of quality, to bring it to international standards. "The legal fraternity must be an active participant in this regard," he said.

The Minister said the processes of law must be quick and non-discriminatory. "We need to strengthen confidence of the people in our judicial syatem...The rule of law is the foundation of civil society. The guilty must not go unpunished and the innocent must not be harassed," he added.

He also said by embracing modern technology at every level of the judicial system, change can be brought about expeditiously.