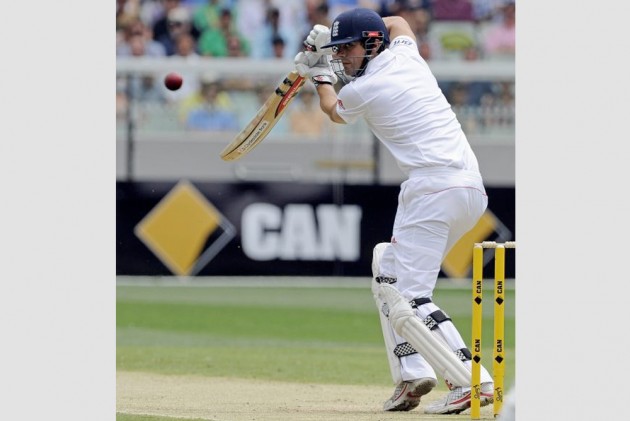 Alastair Cook became England's highest-ever run-scorer in Test cricket when he broke the record of batting mentor Graham Gooch during the second Test against New Zealand at Headingley today.

Then, to his 13th ball after lunch Cook passed Gooch -- whose runs came in four more Tests (118 to 114) -- when he square-drove Tim Southee for four to break a record that had stood for nearly 22 years.

Former England batsman Derek Randall, Cook's coach at Bedford School, north of London, told BBC Radio's Test Match Special: "You can imagine as a cricket coach, to have the pleasure of working with somebody like Alastair Cook is very special.

"The first time I saw him on the bowling machine, I couldn't believe the balance and timing he had. He's a lovely lad, a very special boy."

Cook was eventually out for 75, lbw to off-spinner Mark Craig on the sweep after the tourists overturned Indian umpire S Ravi's original not out decision to end a first-wicket stand with Adam Lyth worth 177.

The skipper batted for nearly four hours and faced 187 balls including 12 fours.

Cook, speaking on Thursday, insisted he was nowhere near Gooch's class as a batsman and tried to play down the significance of the landmark.

"It would be a lovely moment. I wouldn't put myself anywhere near in his class but it would be a great moment," said Cook.

"If I'm lucky enough to get that it will be a moment I'll remember but if I am 30 not out it's important in a game situation I go on and get a big score," added the left-handed Cook, like the right-handed Gooch an Essex and England opening batsman.

Cook added: "I wouldn't be here, or anywhere near here, without Goochie's help, so it will be slightly strange if I do go past his record because without his hard work and dedication to me and my game, I wouldn't have scored half the runs I would have done.

"It's a bit of a strange one. But there will only ever be one Graham Gooch. He's England greatest-ever batsman."

By going past Gooch, Cook moved up to 13th place on the all-time list of leading run-scorers in Test cricket, where retired India great Sachin Tendulkar remains way out in front with 15,921 runs in 200 matches.