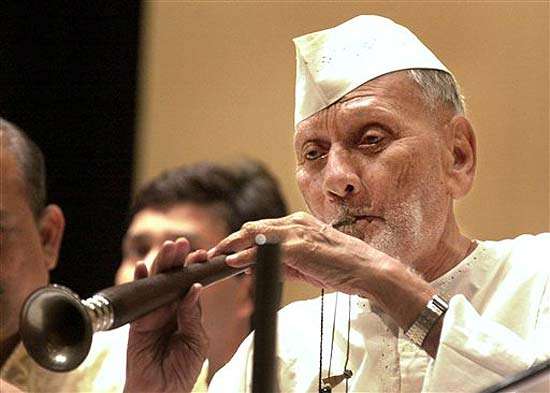 A controversy has erupted over the whereabouts of late Ustad Bismillah Khan's favourite shehnai with his youngest son claiming that it has gone missing from their ancestral house here and police denying it saying it was there in their home.

Nazim Hussain, youngest of the five sons of the shehnai maestro, yesterday claimed that the precious instrument was missing from their house.

He also submitted a letter in Prime Minister Narendra Modi's parliamentary office here, urging him to declare their house as a heritage property. He claimed that his elder brother wanted to convert the house into a commercial complex.

However, he had not mentioned the matter of missing shehnai in his letter.

Local police have denied his claim and said that the shehnai was there in the house and cited a property dispute among the brothers to be behind all this.

"As we came to know about the special shehnai of late Bismillah Khan missing from his house and a fresh dispute among the brothers over an ancestral property, we went to the house to inquire the entire matter and found that there was some fresh property dispute among brothers," said S S Grover, Station House Officer (SHO) of Chowk police station.

He claimed that Nazim's eldest brother Mehtab has denied that the special silver instrument was missing and even showed it to the visiting police team.

"Mehtab even gave a written confirmation in this regard to the police that the shehnai has been kept in their house and it has not gone missing."

Grover claimed that the police team was informed by Mehtab that his younger brother was making baseless allegations due a dispute over property among them.

Nazim had yesterday said that after his father's death, the special shehnai, which was kept in the house under his elder brother's custody, was missing from the house.

"The silver shehnai is there in their house and police have a written confirmation from Mehtab," Circle Officer of Dashashwamedh, D P Shukla said.