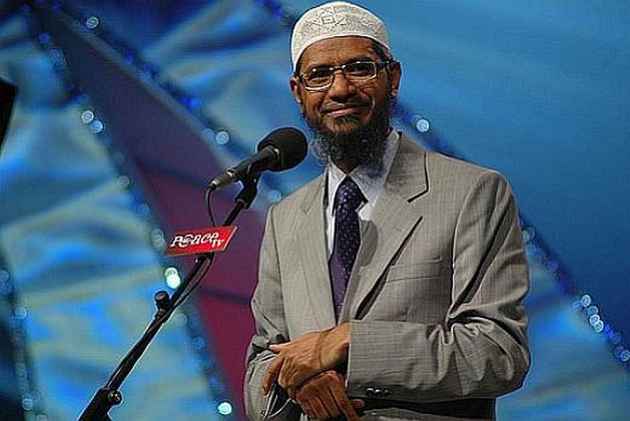 Naik has been changing his base quite frequently after the NIA moved the Interpol for issuance of a Red Corner Notice (RCN), international arrest warrant, against him, they said.

The preacher, who is believed to be having Permanent Residence status in Malaysia, has now sought its citizenship but no decision has been taken so far on his application, the sources said.

The Indian government is planning to use its diplomatic channels to frustrate all attempts by the controversial preacher to get citizenship in any country, they said.

The Malaysian authorities were aware about terror cases pending against the controversial Islamic preacher, they said.

Naik is being probed for terror and money laundering charges. He had fled from India immediately after an investigation against him was initiated.

His present place of stay is unknown and it is believed that he has been shuttling between the UAE, Saudi Arabia, African and Southeast Asian countries, the sources said.

The controversial preacher is accused of spreading hatred by his provocative speeches, funding terrorists and laundering several crores of rupees over the years.

The Interpol was approached against Naik after a year- long probe during which the NIA gathered evidence of his NGO -- Islamic Research Foundation - and Peace TV, being used to allegedly promote hatred between different religious groups.

The central government has already banned his NGO and taken his TV channel off air. During the probe, the NIA claimed to have found 37 properties owned by Naik and companies run by him, which are estimated to be worth more than Rs 100 crore.

A Special NIA court in Mumbai, while issuing a non- bailable warrant against Naik, had said that "there are reasonable grounds to believe that Naik is evading arrest and that he will not voluntarily appear before the court or before the agency."

The NIA alleged that Naik has been promoting enmity and hatred between different religious groups in India through his speeches and lectures on various platforms and inciting Muslim youths and terrorists in India and abroad to commit terrorist acts.

Naik had fled from India on July 1, 2016 after terrorists in neighbouring Bangladesh claimed that they were inspired by his speeches on waging jehad.