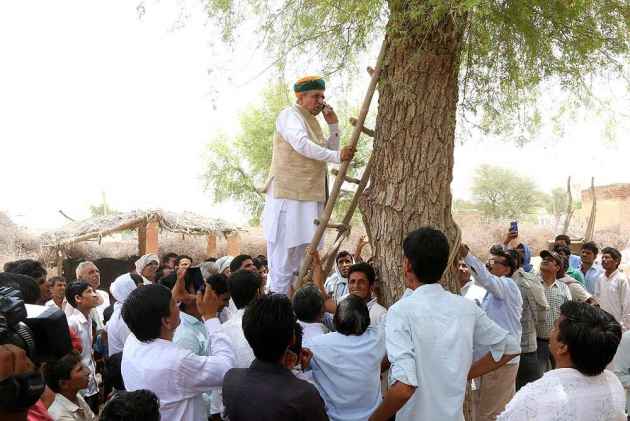 On one hand, 'Digital India' is being emphasized and on the other facilities like electricity, mobile network are not available in villages across the country.

A common man suffers from these problems every day.

On Sunday, Minister of State for Finance Arjun Ram Meghwal faced this problem and that also in his own parliamentary area.

Meghwal was on a tour to Dholia village, about 12 km from Rajasthan's Bikaner district.

During his visit, the villagers talked about their problems in the area and alleged that the officers did not listen to them.

When Meghwal dialled the phone to call the officers from the spot,  network was not found and therefore, he could not reach to them.

The villagers told him that this is a major issue faced on a daily basis.

They also told him of the remedy and said if he climb the trees and then tries to talk on the phone then the network will be found.

Immediately a ladder was brought for the minister.

When Meghwal climbed the ladder with the support of the tree, his cell phone was in the network area.

He talked to the alleged officers and informed them about the complaints.

The video of Meghwal climbing the ladder has gone viral on social media.

After talking to the officers, Meghwal announced the construction of RO plant for the diagnosis of fluoride water problem and Rs. 13 lakh for the set-up of BSNL and other network towers in the villages. (ANI)