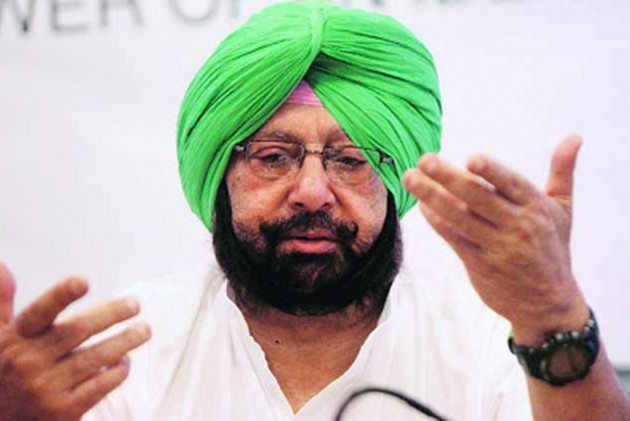 Hours after Rahul Gandhi announced Amarinder Singh as the Congress's chief ministerial face in Punjab, the party's state unit chief challenged Arvind Kejriwal to name AAP's CM candidate to prove it is sincere about the welfare of the people in the state.

Addressing public rallies in Ferozepur Rural and Guru Har Sahai, Amarinder also questioned the credibility of Aam Aadmi Party to govern a state for which it is a "complete outsider".

He flayed Kejriwal's "continued attempts to make a back-door entry to grab the chief ministerial post in Punjab without contesting the polls."

Pointing out that all other major political parties in the fray has named their chief ministerial faces, Amarinder said there was enough evidence to indicate that Kejriwal himself was eying the top post in the state "despite his total disconnect with Punjab's people and their concerns".

Setting at rest speculation, Rahul Gandhi today addressing a poll meeting at Majitha in Amritsar district, announced that Amarinder Singh will be the party's chief ministerial face in the high-stakes Assembly polls.

Despite being asked to name the party's chief ministerial candidate and clarify stand on vital issues such as SYL, he said, "Kejriwal continues to maintain a stoic silence, clearly indicated a nefarious design on his part."

"Kejriwal's adamant refusal to name a Punjabi chief ministerial candidate and to clarify on the AAP candidate for deputy CM’s post suggests that he is interested in taking over the coveted post, as was in fact publicly mentioned by his own party leader recently," Amarinder said.

The PPCC chief claimed that Kejriwal was furthering his personal interests at the cost of thePunjab's people, "who cannot not afford to experiment with outsiders at a critical juncture when the state needed an experienced leadership with roots in Punjab and an understanding of its problems."

"AAP’s total disconnect with Punjab is evident from the fact that it is bringing in thousands of people from other states to steer its electioneering," Amarinder said.

He further said Kejriwal himself as a Haryanvi could not be expected to stand by Punjab on issues of SYL, Chandigarh and Punjabi language, which had been simmering between Haryana and Punjab for decades.

Amarinder said there was no difference between the Akalis and AAP, "with both only interested in promoting their vested interests by looting Punjab and its people."

Lambasting the ruling Badals for allegedly destroying the state's economy and now trying to divide the people through communal polarisation, Amarinder said he has vowed to give a solid "thrashing" to Parkash Singh Badal in Lambi, where he has chosen to contest "only to teach the Badals a lesson".

Expressing concern over the spate of farmer suicides in the state, Amarinder reiterated his promise to waive off all farm debts if Congress comes to power.

He also reiterated his promise of one job per family and revival of industry to wean the youth away from drugs and bring Punjab back on the track of development.