Government, Opposition Unite On How To Resolve Doklam Border Standoff 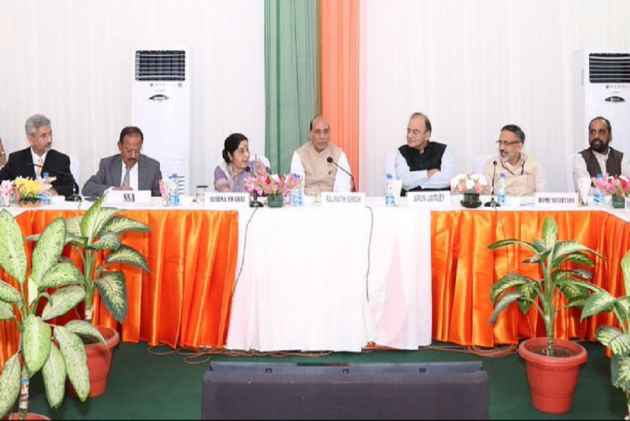 Print
A
A
A
increase text size
Outlook July 15, 2017 10:05 IST Government, Opposition Unite On How To Resolve Doklam Border Standoff

The Congress on Friday urged the government to engage diplomatically with China to deescalate the situation in Dokalam and resolve the border crisis without compromising on India's national interests.

Congress leaders Ghulam Nabi Azad, Anand Sharma and Mallikarjun Kharge attended a meeting where top Union ministers and officials briefed the political parties on the standoff between India and China.

The Congress leaders also alleged security lapses in Jammu and Kashmir that led to the attack on Amarnath pilgrims and asked the government to engage with the local population and help improve the situation in the Kashmir Valley.

"We stand united when it comes to India's national interests," Sharma said.

"We had concerns. We told the government to deescalate the situation and resolve the crisis by diplomatically engaging with China without compromising on India's security interests," he said.

The Congress had earlier raised concerns over the situation in Dokalam area where the armies of China and India are in a border standoff for a month now after Indian troops objected to road construction in the area.

Sources said the opposition was informed about the ground situation in Dokalam area and what the government intended to do to de-escalate the border tension.

Azad also said that all opposition parties have assured the government that when it comes to territorial integrity of the country they all stand united.

He also raised the issue of the overall internal security situation in the country in the wake of rising incidents of lynchings and vigilantism.

He also urged the government on the need to initiate engagement in Kashmir to improve the situation in the valley after all-round condemnation of attacks on Amarnath pilgrims.

The Congress has been critical of the government for not keeping it informed over the developments on the border standoff with China and on the internal security situation.

During the meeting Home Minister Rajnath Singh, Defence Minister Arun Jaitley and External Affiars Minister Sushma Swaraj briefed the leaders of various political parties on the situation in Dokalam area and the steps being taken by the government in this regard.

The briefing comes ahead of the monsoon session of Parliament, beginning on Monday, and is being viewed as an attempt to apparently build a consensus to deal with India's biggest neighbour as well as on the Kashmir issue.

AICC media in-charge Randeep Singh Surjewala earlier in the day took a jibe at the government, saying it was "satisfying" to see that the NDA government had "finally woken up" after three years to brief the opposition on the issues concerning the nation.

Criticising the Modi government, he said the previous Congress-led UPA regime had always kept the opposition in the loop on such critical issues.

He alleged that the present situation in Kashmir was the result of the "immaturity and failure" of the PDP-BJP government in the state, and the Centre.

"Unfortunately, the prime minister and the BJP government think they have all the answers. They have not taken the opposition into confidence on the issue. We hope they take us into confidence," he added.

The CPI(M) said the Opposition will "fully support" the Centre in its efforts to resolve the India-China standoff in Doklam area through diplomatic channels.

CPI(M) general secretary Sitaram Yechury made the remarks after the government briefed the Opposition on the standoff and also on the Kashmir issue.

Yechury, however, asked the government to reflect and introspect why "suddenly" India's neighbourly ties in the region have "deteriorated".

The Marxist leader sought to know why the intelligence inputs available before the attack on Amarnath pilgrims "was not used" and how the bus carrying pilgrims was allowed to go off on its own, as he demanded accountability for the "lapse" be enforced immediately.

In his Facebook post after the meeting, Yechury also claimed that the government had no answers when the opposition expressed "puzzlement" as to why no terror group took responsibility for the attack.

"The government briefed us on the stand-off with China and said that efforts are on to resolve this through diplomatic channels and talks.

"We fully support the government in these efforts. We are for peace and tranquillity with all our neighbours. This is in India's supreme interest," he said in the post.