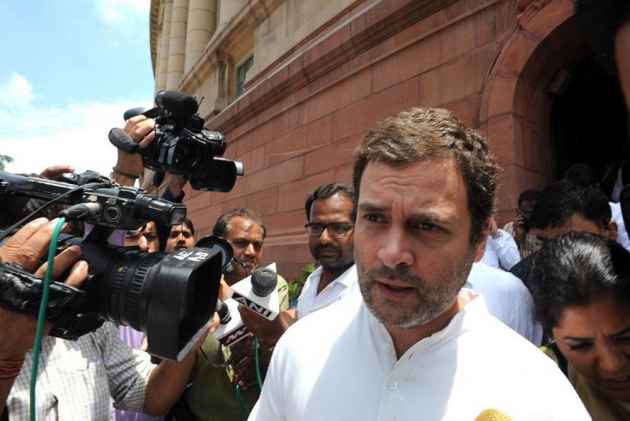 Print
A
A
A
increase text size
Outlook August 05, 2017 13:15 IST Congress Stages Protests Across The Nation After Attack On Rahul Gandhi's Convoy

The Congress Party on Saturday staged protests across the nation over attack on party vice president Rahul Gandhi's convoy in Gujarat on Friday.

Rahul's car was attacked on Friday when he was on his way to the helipad after visiting the flood-hit areas in Gujarat.

Earlier in the day, Rahul cornered Prime Minister Modi and said it was BJP and Rashtriya Swayamsevak Sangh (RSS) way of politics.

"In yesterday's incident, BJP workers threw a stone at me which hit my personal security officer (PSO). This is Prime Minister Modi and BJP-RSS's way of politics. What can I say?" Rahul told media.

Indirectly referring to Prime Minister, Rahul said, "Why the one, who has done this, would condemn the incident?"

After Rahul's car was attacked, Congress spokesperson Randeep Surjewala alleged that BJP goons pelted heavy stones at Rahul's car when he was on his way to the helipad after meeting flood victims at Gujarat's Dhanera.

Following the attack, Rahul took to Twitter and wrote, "Narendra Modi ji's slogans, black flags and stones will not stop us.... We will put in all our might into the service of people."

Condemning the incident, Gujarat Chief Minister Vijay Rupani said that a senior officer has been appointed to investigate into the incident and assured that a strict action will be taken against the guilty.