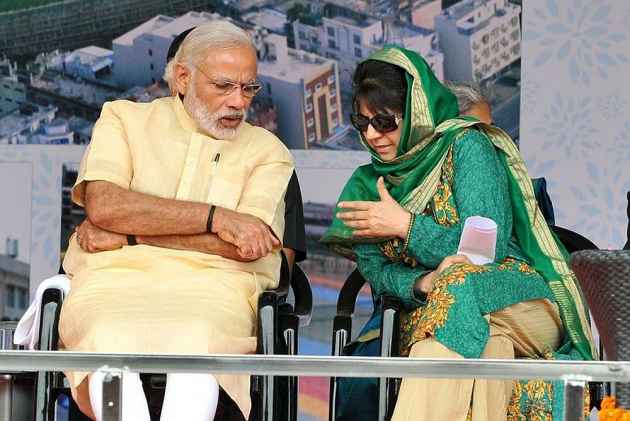 The Congress on Saturday said that Jammu and Kashmir Chief Minister Mehbooba Mufti's remark on Separatists' arrest by the National Investigation Agency (NIA, shows that she has been supporting these separatists who turned out to be terrorists.

"The claws are finally showing, the gloves are out. We have always said that she (Mehbooba) is supporting the separatists who turned up to be terrorists in later days. Now it is the responsibility of the Central Government to act on this issue and come to some conclusion," Congress leader Tom Vadakkan told ANI.

He added that it was clear since the beginning that Mehbooba Mufti is not good for Jammu and Kashmir.

Another Congress leader Abhishek Manu Singhvi said that a clear anti-national statement has been made.

"Prime Minister Narendra Modi has maintained equal silence and the Bharatiya Janata Party (BJP) chief Amit Shah did the same. When it comes to their own party, their chief minister or coalition with a regional party, they maintain equal silence. It is height of hypocrisy," Singhvi added.

Yesterday, Mufti said the arrests were just an administrative measure and will not solve the real problem of Kashmir.

"The NIA arrests do not solve any problems; they are just an administrative measure. An administrative measure cannot help us to resolve the situation and cannot address the real problem of Kashmir. It is important to replace it with a better idea," she said at an event organised by the Bureau of Research on Industry and Economic Fundamentals titled 'Understanding Kashmir' here.

Meanwhile, Mehbooba also warned that any change in Article 35 (A) of the Constitution, which gives a special state provision to Jammu and Kashmir and is being debated in the Supreme Court would not be in favour of the people living in the Valley and would invite repercussions.

Article 35 (A) of the Constitution empowers the state legislature to define permanent residents and accord special rights and privileges to the people of Jammu and Kashmir.

"Any tempering with Article 35(A) won't be acceptable. I won't hesitate in saying that nobody will even carry the corpse of the National Flag in Kashmir, if it happens. Let me make it very clear," she said. (ANI)