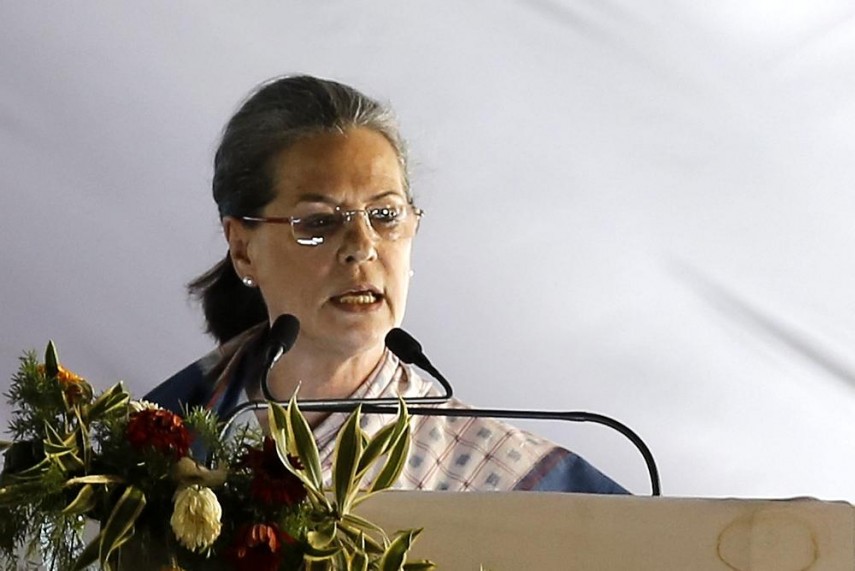 In a blistering attack on the Narendra Modi government, Congress President Sonia Gandhi today accused it of destabilising institutions, polarising society and mistaking its parliamentary majority for a licence to impose its narrow ideology on people.

Addressing the first meeting of Congress Parliamentary Party in the ongoing Monsoon session of Parliament, she also slammed it for "deception", "glib marketing slogans" and snatching the rights of Dalits, adivasis, specifically citing the Gujarat incident where four Dalits were beaten and humiliated publicly.

She called the Gujarat case, "just one example of the social terror this government condones".

"In the last few months, we have witnessed how the Modi Government's project of destabilising institutions and polarising our society has played out with renewed vigour to the detriment of constitutional values.

Gandhi referred to the unrest in the Kashmir Valley which has witnessed turmoil for the past 11 days after the killing of Hizbul commander Burhan Wani with clashes claiming over 40 lives.

"Recent events in the Valley are tragic and pose a grave danger to the country. There can be no compromise on national security. Militants must be dealt with firmly.Yet we must ask ourselves, what has driven scores of young people to such levels of violence," she said,

Questioning PM's foreign policy, she said, "How does the Modi government explain the incoherence of its foreign policy despite PM's frequent travels abroad, his equally frequent embraces of world leaders and impromptu birthday calls!! Its policy towards Pakistan oscillates between one extreme to the other. The government seems to be changing our country's stand on security and defence, departing radically from policies that have stood the test of time."

Gandhi said, "the opaqueness of the Modi government in decision-making and brazen promotion of cronyism has cast a dark shadow on its integrity".

The Congress President also accused the government of practising deception, saying they are creating a "bubble" of achievement.

"Deception is not new to this ruling party. They are skilled at ignoring facts, propagating false claims and orchestrating unsubstantiated charges against the opposition, especially the Congress. As they complete two years in office, they have sought to create a bubble of achievement. But what have they exactly achieved?" she said questioning the government's record on job creation, exports and prices.

Describing the government as a "good marketeer", the Congress chief said, "We are presented with a government that is anchored in slick marketing events, glib marketing slogans, in repackaging, in embellishment, and exaggeration. We may be lacking in numbers, but we will make up for it with our work and continue to demand accountability through Parliament."

Seeking to bring the attention back on alleged scams in BJP-ruled states, Gandhi asked the government, "What happened to the scandals that have been exposed and are sought to be buried in BJP-run states like Maharashtra, Madhya Pradesh, Chhattisgarh and in PM's own state of Gujarat. And yet he claims he is curbing corruption".

"Government's ill-prepared policy on the NSG membership has exposed us to a snub and is in complete contrast to what the UPA achieved in 2008. Our relations with Nepal are at an all-time low," she noted.

She also picked holes in government's claims of economic growth, saying, "When it comes to growth and GDP figures that they tout, questions on their veracity are raised even by their own party leaders. BJP blocked every important FDI initiative of UPA government. Yet now it has put in place a free-for-all policy even in sensitive areas like defence."

Other points on which Gandhi attacked the government were its confrontation with the judiciary and civil society, its GDP growth numbers, the Gujarat petroleum corporation scam, and the recent "never-before seen" act of changing of pens during Rajya Sabha elections in Haryana.

"There is constant confrontation with the judiciary, civil society and student organisations and debate is being stifled," she said.

"Fortunately, an independent and fearless judiciary has reminded him about Constitutional norms and values," she said, adding that "we cannot afford to be complacent since similar tactics are still being attempted in other Congress-ruled states".

"The widespread distress in rural areas seems to be of no concern to the Modi government," she charged, adding the government was starving funds to Panchayati Raj Ministry created by UPA which was "slowly being driven into extinction".

"BJP-ruled states are dismantling the edifice of the third-tier of democracy by taking away the autonomy of urban and rural local bodies," she said, adding the Modi government is also defying labour unions and reducing the security of their savings and the 7th Pay Commission recommendations have done "injustice" to government employees and armed forces.

She also accused government of "snatching away" rights of adivasis, Dalits and other traditional forest dwellers and "systematically weakening and subverting environmental laws".

"Brutal atrocities against scheduled castes, scheduled tribes and minorities are continuing with impunity and shaming us all," she said.

The Congress chief said job creation has not only been at its lowest in six years but retrenchment of industrial workers and loss of tens of thousands of jobs in export manufacturing sector has added to the misery of the youth and the poor.

She also said that there has been a continuous decline in exports over the last 18 months and contrary to claims that India has turned power surplus, power shortages continue to be endemic.

Sonia said prices of essential commodities, especially food items, are at an all time high and the "Modi government's hollow claims on inflation have been exposed recently by no less than the Reserve Bank Governor."