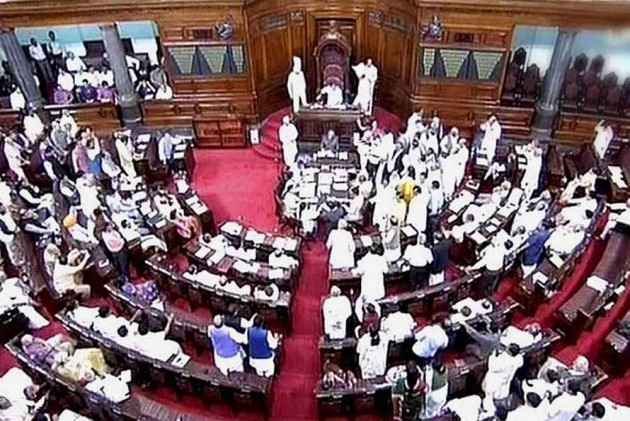 The Rajya Sabha Committee on GST today submitted its report recommending that the one per cent additional tax by states should not be levied on goods not for sale and favoured compensation to states for five years but Congress, Left and AIADMK gave dissenting notes.

The major recommendation of the 21-member committee was the one relating to Clause 9 as it felt the one per cent additional tax will lead to cascading of taxes. It wanted an explanation to be included in the provision that would make it clear that the one per cent would be on goods sold and not on supply on inter-company inventory transfers.

It recommended that an explanation should be given in Clause 18 that the word 'supply' would mean "Supply: All forms of supply made for a consideration".

In its dissent, the Congress favoured a simple 18 per cent GST on all goods including petroleum products and alcohol and opposed states being given powers to levy one per cent additional tax.

AIADMK and Left parties in its notes termed some of the provisions as impinging on the legislative sovereignty of both Parliament and state legislatures. AIADMK also sought keeping out petroleum products and tobacco out of the GST regime.

The report of the Committee, headed by BJP's Bhupender Yadav, which was tabled in the Rajya Sabha, suggested changes in clauses pertaining to compensation but endorsed other 19 provisions like keeping alcohol out of the regime and leaving it to the GST Council to decide on timing of levying GST on petroleum products.

Reacting to the report including the dissent, Finance Minister Arun Jaitley said the government will go ahead with enacting the legislation in Parliament.

Hopeful of getting the "revolutionary" bill passed, Jaitley said, "We are going to go ahead with the GST legislation. We will still try and build consensus and explain the rationale and reasoning as far as Congress is concerned."

On a clause relating to levy of 1 per cent additional tax by states, the Committee said, it could lead to cascading of taxes. The Committee suggested it should only be levied on "all forms of supply made for a consideration".

It, however, retained the representation of the Centre and States in the GST Council at the proposed level at one-third and two-third despite demand to reduce Centre's representation to one-fourth.

To increase the resources of states, the Committee suggested that the "band" rate should be defined in the GST laws. The proposal would provide option to states to levy additional taxes within the band on specified goods and services to raise additional resources to meet local needs.

In its dissent note to the RS panel report, the Congress said the bill is "pitted with compromises, exclusions and exceptions that make it impossible for us to extend our support to the Bill in the absence of the amendments we have proposed being incorporated in the bill..."

The party demanded that the GST rate should be capped at 18 per cent to prevent any "unfair burden" on consumers, particularly the poor.

The main opposition party is also against power to states to impose 1 per cent additional manufacturing tax. It has given dissent on eight points.

AIADMK's note said that GST Council as a constitutional body "impinges" on the legislative sovereignty of both Parliament and the States legislatures.

"It also completely jeopardises the autonomy of the states in fiscal matters," the note said, adding "we strongly object to the provision for the GST Council".

The Left Parties demanded that petroleum and petroleum products should be totally kept outside GST and states should also be empowered to levy higher taxes on tobacco and tobacco products.

The note of Left parties further said the states should have leverage for protecting a particular local brand of MSME product and protecting agri-based products for promoting farmers and industry.

Commenting on today's development, PwC Partner (Indirect Tax) Amit Bhagat said "there appears to be no reason why the Bill would not be passed by Rajya Sabha as there seem to be broad consensus".

EY India Tax Partner Bipin Sapra said "the Select Committee's recommendation to retain 1 per cent origin based tax is a regressive step in the GST design and will have a cascading impact".