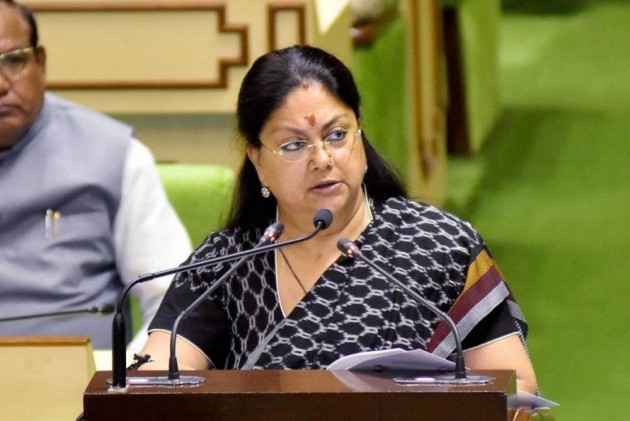 The Congress today accused Rajasthan Chief Minister Vasundhara Raje of violating poll norms by staying in the constituency after the campaigning for bye-election ended.

The Chief Minister's media advisors, said she stayed in Dholpur on health grounds and the same was communicated to the election officer.

PCC president Sachin Pilot said, "Raje has violated the instructions which is very disappointing. All the Congress leaders left the constituency after the campaigning got over last evening but Raje stayed there to influence the voters."

"This is violation of code of conduct and against the sanctity of the chief ministerial post," he said.

"The chief minister stayed in Dholpur on the grounds of sickness. I have communicated to the election commission and waiting for further instructions from there," she said.

As per the instructions of the election commission, all political parties leaders have to leave a constituency if they are not a voter or a candidate or candidate's election agent after the campaigning ends.

BJP Dholpur district president Bahadur Singh said the chief minister suffered foot strain after she returned from campaigning yesterday and it was not possible for her to move therefore she stayed in Dholpur to take rest.

"Doctors advised her to not move so she is taking rest. All other leaders returned yesterday after the campaigning but the chief minister had to stay due to this problem and she is taking rest," Raje's media advisor said.

The bye-election has been necessitated after the seat fell vacant on termination of the membership of B L Kushwah following conviction and life imprisonment in a murder case in December last year.

As many as 15 candidates, including 12 independents, are in the fray for the bypoll.

The SP has fielded Banvari Sharma. The seat will go to poll tomorrow and counting of votes will take place on April 13.