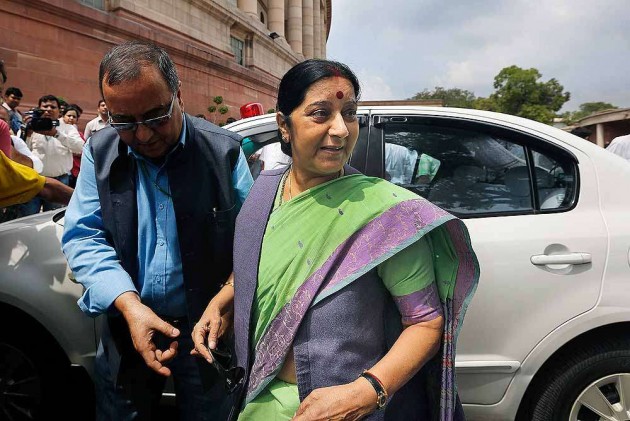 Congress today rejected Sushma Swaraj's claim of helping Lalit Modi on humanitarian grounds in Lok Sabha, saying she could have done it under a legal framework and demanded her resignation on moral grounds.

The attack by Congress leader Mallikarjun Kharge in the House, which saw normalcy virtually for the first time in the Monsoon Session, came during a discussion on the Lalit Modi controversy. He also called for a reply from Prime Minister Narendra Modi and not Swaraj, whose "role" is being debated.

The debate on the issue over which Parliament has been paralysed for the last four weeks was taken up on the penultimate day of the session after the government agreed to accept an adjourment motion as was demanded by the opposition.

Initiating the debate, Kharge picked holes in the External Affairs Minister's defence and raised a host of questions as to why she agreed to help a "fugitive" probed by the Enforcement Directorate.

Kharge wondered as to why the government did not appeal in the Supreme Court's against the Delhi High Court's decision to restore his passport.

He also asked who among the Prime Minister, Finance Ministry or External Affairs Minsitry was responsible for not appealing against the order.

He also refused to accept Swaraj's contention that she had only responded "orally" to the British envoy's query that bilateral relations will not be affected if Lalit Modi was granted travel documents to visit his ailing wife in Portugal.

"Is that not a recommendation," Kharge asked and contended that she did not even speak to her own ministry officials regarding the issue.

Kharge also said the Prime Minister "has his eyes, ears and mouth shut", as he asked several questions to the government and Swaraj.

Insisting that Swaraj should resign on the question of propriety, he told Swaraj "you have accepted that you helped. Your admission is proof...Therefore, we demand your resignation."

"Your help shows your relationship with him (Lalit Modi) is deep. Your relationship is economic. What you did was a favour and this is our charge against you," Kharge said.

He spoke about Swaraj's lawyer husband and daughter working for the former IPL Commissioner who is facing a probe in connection with alleged financial irregularities in conduct of a IPL tournament.

Kharge claimed Swaraj had changed the government's policy on the issue by telling British authorities that giving him travel documents would not impact their bilateral ties, as then Finance Minister P Chidambaram had sought his deportation and told his UK counterpart that giving him travel papers would impair their ties.

Among the three reasons cited by Lalit Modi to seek travel documents, his wife's illness was never the first cause and he used the permission to go to "resorts" everywhere, Kharge alleged.

The Congress leader also attacked a BJP chief minister for helping him but his comments about her were expunged.