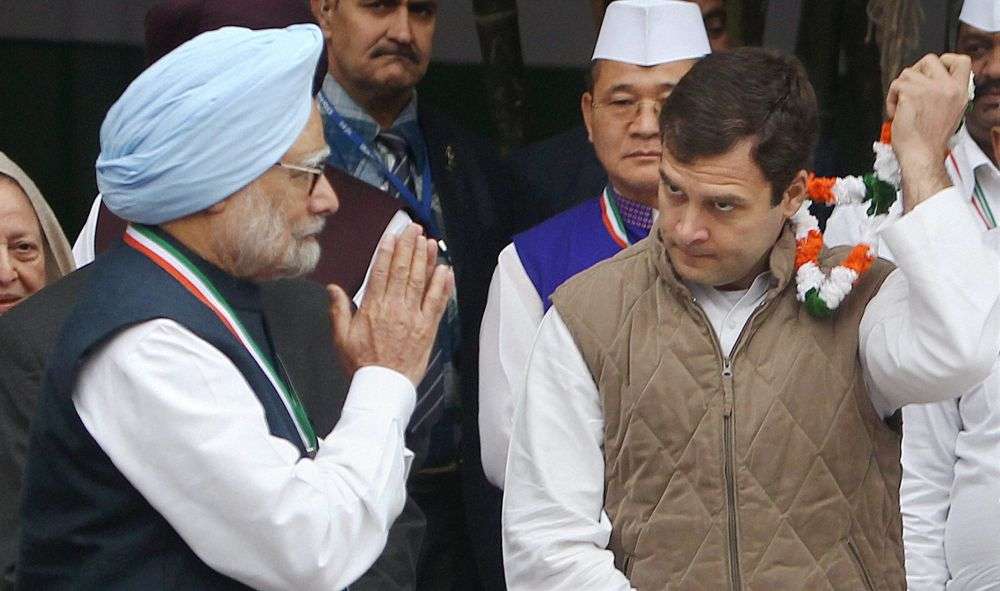 Facing accusations of policy paralysis, Prime Minister Manmohan Singh today admitted that growth rate had slowed down because clearances were not granted to infrastructure projects for the fear of CAG and CVC.

He asked the people to judge the record of his government while closely scrutinising that of opposition governments.

Addressing the AICC session here, he rued that his government was not getting the "credit it deserves" even though the country has seen the average growth of 7.9 per cent over the last nine years despite two bouts of global recession.

With the upcoming Lok Sabha polls apparently in his mind, Singh said the people should compare his government's performance while "closely scrutinising" the record and claims of others, particularly in the context of inclusiveness, an apparent reference to BJP's Prime Ministerial candidate Narendra Modi.

The Prime Minister said that the recent election results were disappointing, but stressed there was no reason for despair as the party could still win the Lok Sabha polls with an effective strategy under the leadership of Rahul Gandhi.

"We agree that there are certain domestic reasons responsible for the slowdown in our growth rate. Infrastructure projects do not get expeditious clearances. Bureaucrats are hesitant to take decisions fearing that CVC and CAG will raise questions over their decisions," he said.

He was apparently referring to the questions raised by CAG over various decisions including in coal blocks allocation and 2G spectrum.

Singh asserted that his government was taking steps to remove such "obstacles" as he cited that the projects worth Rs 5 lakh crore had been cleared by the Cabinet. "It will take some time for our efforts to bear fruit."

Talking about efforts to deal with corruption, he said these issues are being dealt with as per law, although his government has followed the earlier policies in the allocation of coal blocks and 2G spectrum.

A resolution tabled at the AICC session said the government had "struck a defining blow" on corruption by enacting the Right to Information Act and bringing in the Lokpal Bill in Parliament along with six anti-corruption bills.

Observing that his government was also criticised for rise in prices, the Prime Minister said it is correct that there has been a hike in the inflation rate, especially in the prices of edible items.

"But we must remember that those who produce foodgrains, vegetables, fruits, milk and eggs have benefited out of the rise in prices. Though the concerns over price rise are completely valid, we have to also recognise the fact that the incomes of a large number of people have also gone up.

"This can be ascertained from the fact that the real per capita consumption and real wages in rural areas have gone up considerably," Singh said.

Rise in consumption and providing better facilities for marketing, transport and storage would also be steps towards checking price rise, he said.

Calling for a thorough analysis of the reasons for Congress drubbing in the recent Assembly elections, he said he was fully confident that "if we prepare ourselves properly for the 2014 elections and take the report of our government's performance to the people, our performance in these polls will be good."

While Congress President Sonia Gandhi has successfully led the party since she took the reins in 2008, "the work of our Vice President Rahulji will generate new enthusiasm and energy in the party," he said.

"The way he (Rahul) is stressing on the basic ideals of the party, it is definite that we will scale new heights in the coming days. I have no doubts in my mind that we will fully succeed in the general elections under his leadership," the Prime Minister said.

Admitting that "we have committed a few mistakes", Singh said, "We have always tried to correct our mistakes and take lessons from them. But our intentions have always been clear."

In his 20-minute speech, the Prime Minister also listed the achievements of his government, including maintaining an average GDP growth rate of 7.9 per cent, reduction in the number of people below poverty line, rise in agricultural growth, steps to curb violence against women and downtrodden sections, besides enhancing opportunities for education and employment.