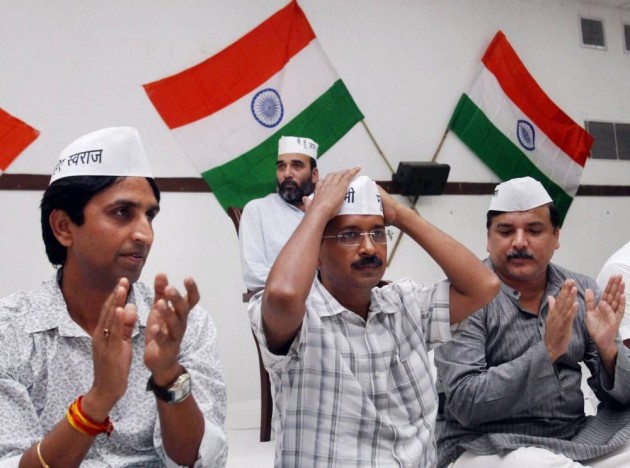 AAP chief Arvind Kejriwal today came under attack from the BJP and Congress for meeting controversial Muslim cleric Maulana Tauqeer Raza Khan in Bareilly recently and was accused of playing the 'communal card'.

While the Congress dubbed AAP as the "B team of BJP", the BJP lashed out at Kejriwal saying the meeting has exposed him.

The AAP chief today sought to downplay the meeting saying he had gone to Bareilly on a religious tour and met the Muslim leader because "he is a respectable person in the town".

"I had gone to the dargah to pray for a corruption free India and met Mualana Raza Saheb as he is a very respected man there. I met him and appealed him that everyone should come together to save the country as it is going through a sensitive phase," Kejriwal said.

On the accusation of playing 'the communal card', Kejriwal said he has been visiting temples, mosques and meeting many people.

He clarified that he was not aware of the charges against the Maulana of issuing a fatwa against Bangladeshi writer Taslima Nasreen.

He said that he spoke to the muslim cleric today again and he told him that all that is being said about him is wrong.

"I spoke to him and he told me that he can never issue a fatwa as fatwa is issued by Mufti. He told me that the head of a board of hundred people, of which he too was a member years ago, had issued the fatwa. He also told me that just because he is more known and respected among the people, his name came into the picture," Kejriwal said.

The AAP chief said that he and his party followers don't believe in the politics of violence and they have entered politics to change it.

Moreover, he said, that his party is not getting into any alliance with the Maulana.

When asked about the meeting, Maulana Tauqeer Raza Khan said that he always liked Kejriwal for initiating the India against Corruption movement.

"To stem the rot in the system, one has to get into the system. To clean the garbage, we need 'Jhadu' (broom--AAP's poll symbol)," the Maulana said.

Congress spokesman Meem Afzal alleged that Kejriwal whose politics originated with the backing of the RSS was trying to make Muslims "a football" for electoral mileage.