Coalscam: SC Stays Summons to Manmohan, Others, Centre Gets Notice 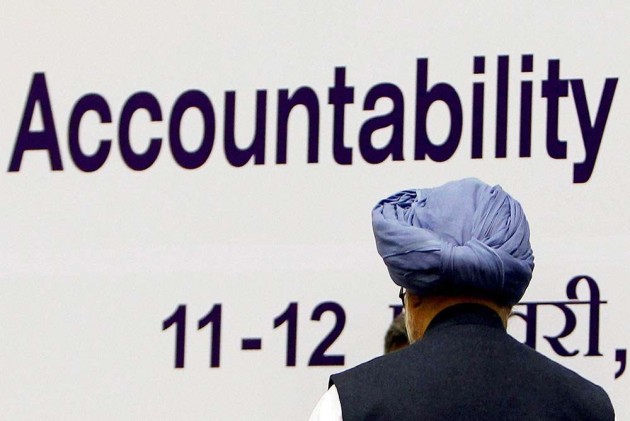 Print
A
A
A
increase text size
Outlook April 01, 2015 11:47 IST Coalscam: SC Stays Summons to Manmohan, Others, Centre Gets Notice

Former Prime Minister Manmohan Singh today got relief from the Supreme Court which stayed the trial court order summoning him as accused in a coal block allocation case and the proceedings before it after he questioned the lack of sanction to prosecute him and contended that there was no criminality in the decision.

"We issue notice on all six petitions. The trial court order shall remain stayed," a bench of justices V Gopala Gowda and C Nagappan said, adding the consequential proceedings "arising out" of the summoning order shall also remain stayed.

Special CBI Judge Bharat Parashar had on March 11 rejected the CBI's closure report and summoned Singh and the other five as accused to appear on April 8.

Watched by 82-year-old Singh's daughters Upinder and Daman Singh, the 35-minute proceedings saw a battery of lawyers, headed by senior counsel Kapil Sibal, contending that the trial court had exceeded its jurisdiction by attributing criminality in administrative decisions of the Prime Minister, who was also holding the Coal portfolio then.

"I must confess that I have not been able to find out what is the illegal act done by the petitioner (Singh) in the case.

"The petition raises substantial questions of law which call for authoritative pronouncement from this court in relation to the inter-play between governmental functions and criminal prosecution under the PC Act, specially in cases where there is not even a whiff, let alone an allegation of quid pro quo, and the case is based upon the processes of governmental decisions," Sibal said.

Referrring to the trial court order, Sibal said, "It is purely an administrative decision. What is illegal in it? Is it illegal to allot a mine?

He said the trial court's decision to summon the former PM is a "grave mistake both in law" and "understanding of evidence".

Sibal said it is not an illegal act to allot a mine contending that the administrative acts of the PM cannot be faulted on the ground that he did not follow recommendations or procedures adopted by the screening committee.

He then referred to the earlier Supreme Court judgement by which all the coal block allocations were quashed on the ground that screening committee procedures were illegal.

Sibal also said that the trial court order summoning former Prime Minister and others does not stand the scrutiny of "public reasoning".

"Moreover, keeping the federal structure of governance in mind, the then PM had honoured the request made by Odisha Chief Minister for allocation of coal block to a joint venture between private and public enterprises," he said.

He also said that the trial court order does not deal with the provisions on requirement of prior sanction to prosecute a public servant under section 197 of the criminal procedure code (CrPC) and the Prevention of Corruption Act.

"The trial court failed to appreciate that the petitioner (at the time of commission of the alleged offence) was holding an office as a public servant not removable from such office save by or with the sanction of the government.

"The trial court also failed to appreciate that no court was entitled to take cognizance of such alleged offences in the absence of any sanction under section 197 of CrPC," he said while referring to the petition.

Arguing on 'essential ingredients' of an offence, Sibal said that "there is no reference to meeting of minds to commit an illegal act by the accused persons".

The bench asked Sibal to satisfy it on provisions relating to grant of sanction to prosecute a public servant.

Sibal referred to various Supreme Court judgements and said "even if I am the Coal Minister at the relevant time, I don't lose the status of the Prime Minister who has got plenary power. Everyday, I take decisions as minister and reject the advice, should I be sent to Tihar Jail?".

Sibal said a decision may be "right or wrong" but it cannot be said to be an illegal act and the trial court order does not stand the scrutiny of public reasoning.

"There was no final allocation. There was no communication of the decision. A decision unless communicated, does not become a decision," he said.

Sibal also referred to the December 16, 2014 order of the trial court by which CBI was asked to question the former Prime Minister, and said that "a judge cannot do this. This is not fair. This is maverick."

The bench also issued notice to the Centre on a separate plea filed by Hindalco Industries Ltd challenging the constitutional validity of section 13 (1)(d)(iii) of the Prevention of Corruption (PC) Act.

The provision says that a person, holding office as a public servant, can be tried if he obtains "for any person any valuable thing or pecuniary advantage without any public interest".

Sibal, referring to the plea, further said the special CBI court failed to appreciate the fact that the allegations against the former PM pertained to "his actions in discharge" of his official duties.

The requirement to have prior sanction to prosecute does not "obviate", despite the fact that Singh was no longer the coal minister, the plea said, adding that moreover, the former PM was still a member of Rajya Sabha and hence, the sanction under section 19 of the PC Act was still required.

Any administrative decision, causing benefit to a private party, cannot be brought "within the realm of criminal misconduct".

"The trial court failed to appreciate that there was no manifestation of any criminal conspiracy involving the petitioner, and action taken in ordinary course of administration cannot be viewed with tinted glasses to give an administrative decision the colour of criminality.

"The trial court grossly erred in attempting to develop an elaborate conspiracy theory, and in attributing a pivotal role to the petitioner, without there being any material or evidence for any conspiratorial conduct on part of the petitioner whatsoever," Singh said in his plea.

It further said that in the matter of policy and economic decision making, the scope of "judicial review" is very limited.

"The trial court seems to have ignored the fundamental principle of law that when interpreting a criminal statute, fairness requires that a person cannot be sent to jail for a crime he could not with reasonable certainty know that he was committing.

"The crime alleged to be committed must be clearly be defined and must not lack precising and clarity. If mens rea were to be excluded in interpreting section 13(1)(d)(iii) of the PC Act to make it a strict liability offence, then the provision would lack both precision and clarity since the public servant taking an administrative decision in public interest would not know with reasonable certainty that he is committing a crime," Singh said in his plea. (More)

said the firm has filed a petition challenging the constitutional validity of section 13(1)(d)(iii) of the PC Act "in as much as the same criminalises an exercise of discretion by government servants without any further requirement of mens rea (criminal intention), dishonesty, quid pro quo or illegal gratification on the part of the public servant.

"Apart therefrom, the provision is vague and arbitrary. The provision also impinges on the fundamental right to carry on business by criminalising legitimate business activities without anything more."

He said that in a democracy "where a Prime Minister has plenary powers, if a judge decides what is 'public interest', then this section will fall flat being unconstitutional."

The Special CBI court had on March 11 said that prima facie it is clear that the criminal conspiracy which was initially conceived by Birla, Hindalco and its two officials, was carried out further "by roping in Parakh, and thereafter the then Minister of Coal, Manmohan Singh".