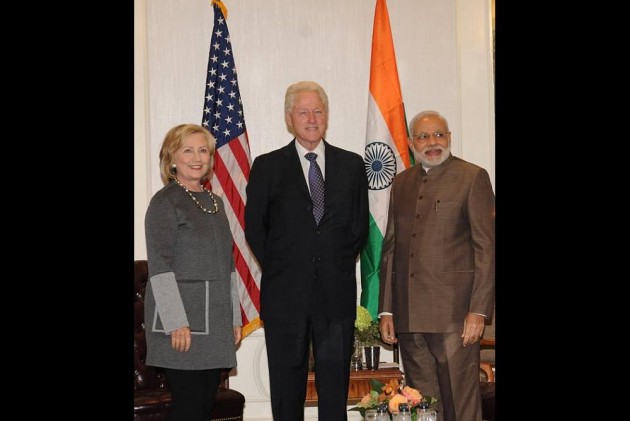 Showering effusive praise on Prime Minister Narendra Modi, former US President Bill Clinton today said no one else before him had "knowledge and votes" to build a national economy, as the Clinton couple met the Indian leader here.

Clinton and his wife Hillary Clinton had a 45-minute long meeting with Modi, who was also accompanied by External Affairs Minister Sushma Swaraj.

Hillary and Swaraj warmly hugged each other.

Both the Prime Minister and Swaraj also greeted the Clintons on becoming new grandparents.

"(I) am thrilled. No 1 had the knowledge and voted before you to build a national economy," External Affairs Ministry Spokesperson Syed Akbaruddin tweeted Bill Clinton as conveying to Modi.

Known for their love for India, Bill and Hillary were expected to discuss Indo-US engagements and the priorities of the new government in this regard.

The meeting comes in the backdrop of reports that Hillary may contest the US Presidential elections in 2016.

"Thank you 4 undertaking cleaning of Ganga. It is a sacred project and smart approach," the former American President told the Prime Minister.

"Your efforts at cleaning the Ganga will send a message to others in Asia," Akbaruddin tweeted Hillary as conveying to Modi.