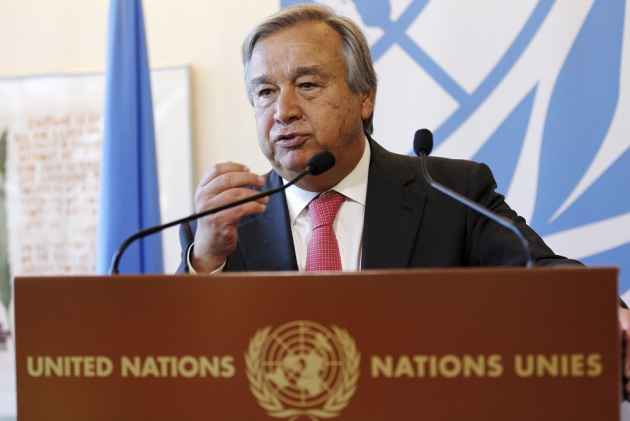 On an important note, UN chief Antonio Guterres has bluntly warned world leaders that the impact of climate change could affect food production, water security and weather patterns "from Canada to India", amid threats by US President Donald Trump that he may pull out of the landmark Paris deal.

Guterres said climate change is "undeniable", in a stark contrast to the position taken by Trump, who has previously called it a "a hoax" and last week shrugged off pressure from US allies during the G7 summit in Sicily to endorse the deal his predecessor Barack Obama worked passionately to achieve.

In his first major speech on climate change since he assumed charge as the head of the UN this January, the UN secretary-general said the "world is in a mess" and urged the international community to "stay the course" even if one government does not believe in the emissions-cutting deal.

"Yes, not everyone will move at the same pace or with equal vigour. But if any government doubts the global will and need for this accord, that is reason for all others to unite even stronger and stay the course," he told students, business leaders and academics at the New York University Stern School of Business.

"It is a reason to build ever broader coalitions — with civil society and business, with cities and states, with academia and community leaders," Guterres said yesterday.

His speech comes as Trump this week decides whether the US - the second-largest emitter of greenhouse gases after China - will adhere to the limit its emissions as layed out in the 2015 Paris climate agreement.

While Guterres did not mention Trump or his administration in his speech, but later responding to a question from the audience, he said the UN believes "it would be important for the US not to leave the Paris agreement" and even if Trump withdraws, "it's very important for the US society as a whole — the cities, the states, the companies, the businesses — to remain engaged" with the agreement.

He pointed out the seriousness of climate change and said its effects were dangerous and they were accelerating. The climate change could affect food production, water security and weather patterns "from Canada to India," he warned.

"And so my argument today is that it is absolutely essential that the world implements the Paris agreement – and that we fulfil that duty with increased ambition. The reason is three-fold: Climate change is undeniable. Climate action is unstoppable. And climate solutions provide opportunities that are unmatchable," he said.

The climate pact urges countries to intensify the actions and investments needed for a sustainable low carbon future.

It also aims to strengthen the ability of countries to deal with the impacts of climate change and calls for scaled up financial flows, a new technology framework and an enhanced capacity-building framework to support action by developing countries and the most vulnerable countries in line with their own national objectives.

"Some may seek to portray the response to climate change as a fundamental threat to the economy. Yet, what we are witnessing in these early years of a systemic response is the opposite. We are seeing new industries. New markets. Healthier environments. More jobs. Less dependency on global supply chains of fossil fuels," Guterres said.

He said the nations which embrace green technologies will set the "gold standard" for economic leadership in the 21st century. "The falling cost of renewables is one of the most encouraging stories on the planet today," he said.

The UN chief stressed new renewable energy jobs now outstrip those created in the oil and gas industries in the US and China.

China aims to increase its renewable energy by about 40 per cent by 2020 while industry experts predict India's solar capacity will double this year to 18 gigawatts.

Major oil producers are also seeing the future and diversifying their economies, even Saudi Arabia has announced plans to install 700 megawatts of solar and wind power.

"The real danger is not the threat to one's economy that comes from acting. It is, instead, the risk to one's economy by failing to act. The message is simple: The sustainability train has left the station. Get on board or get left behind," he said.

Laying out a five-point action plan to mobilise the world for climate action, Guterres said he will intensify political engagement with countries to increase efforts to limit temperature rise to well below 2 degree-Celsius and as close as possible to 1.5 degree-Celsius, the first point.

"That is where true change will be achieved," he said.

The UN chief added that he will work with UN member- states to mobilise national and international resources for adaptation and implementation of national climate action plans.