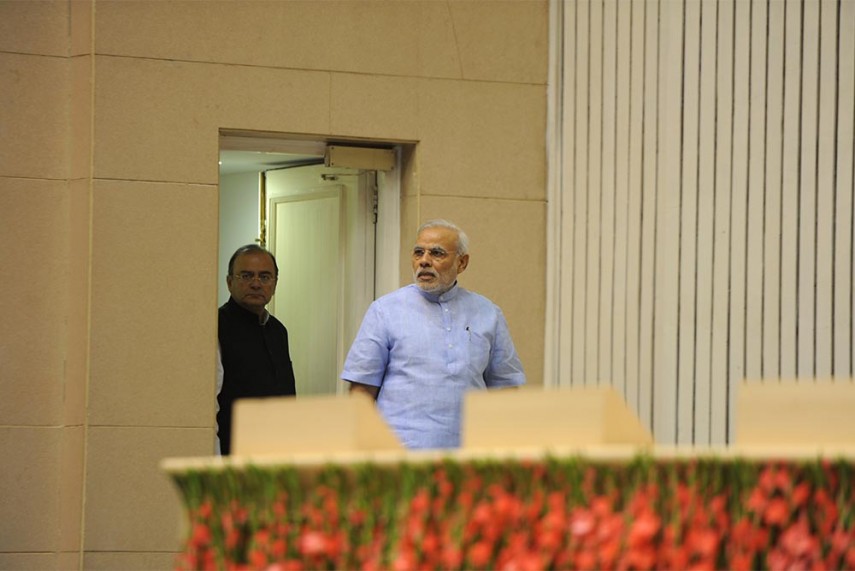 Against the backdrop of his demonetisation decision, Prime Minister Narendra Modi today said cleaning the system from black money and corruption is "very high" on his agenda amid a push towards employment generation and self-employment opportunities.

"India is currently witnessing an economic transformation... We are now moving towards a digital and cashless economy," he said while addressing via video conferencing the 'Economic Times Asian Business Leaders Conclave 2016' in Kuala Lumpur along with his Malaysian counterpart Najib Razak.

"Presently, cleaning the system from black money and corruption is very high on my agenda," Modi said, against the backdrop of his November 8 decision to scrap notes of Rs 500 and Rs 1000 denomination.

He said the economic process in India is being geared towards activities which are vital for generating employment or self-employment opportunities.

The Prime Minister told the gathering that a number of steps have been taken to attract greater FDI and listed the various steps taken in this direction.

He also mentioned that amendment to the Constitution to pave the way for Goods and Services Tax (GST), which will overhaul the indirect tax system in India, has been cleared by Parliament and "this is expected to be implemented in 2017".

"We welcome those who are not in India so far... India is not only a good destination. It's always a good decision to be in India," Modi said.

"We have opened up new sectors for FDI and enhanced caps for existing sectors," he said, adding the government's concerted efforts on major FDI policy reforms continue and conditions for investments have been simplified.

Total FDI inflows in the last two and a half years have touched USD 130 billion, Modi said.

"The positive change in policy, regulatory and investment environment in India is recognized by both domestic and foreign investors," he said.

Referring to "Make in India" which celebrated 2nd anniversary this year, the Prime Minister said the initiative is aimed at making the country a global hub of manufacturing, design and innovation.

"India is currently buzzing with entrepreneurial activity like never before... We have now become the 6th largest manufacturing country in the world," he said.

"Our efforts to ensure ease of doing business in India have been comprehensive and wide ranging, including legislative and structural," Modi said.

He said the government has also "rationalised greatly" the licensing regime and launched "single window interfaces" for registering a business, export-import clearances and labour compliance.

"The outcomes of our efforts are visible from India's global rankings on various indicators," he said.

"We have adopted a comprehensive National Intellectual Property Rights policy to lay the future roadmap for intellectual property," he said about an issue which has been a major concern among the foreign investors.

Modi said startups are the next big economic force in India and are "no less than a revolution".

"Building futuristic infrastructure is the biggest task at our hand. We are developing a pentagon of industrial corridors across India," the Prime Minister said.

He said there is immense focus on removing the logistics constraints and roads, railways, ports are being upgraded across the country.

"This is a time for integration...At the level of economy also, we are among the most open and integrated economies," he said.

Continue FREE with Ads Pay Rs. 1 to Read Without Ads
READ MORE IN:
Narendra Modi National
Next Story : Nusli Wadia Says He Had Differences With Ratan Tata Over Money Lost Due To The Nano
Download the Outlook ​Magazines App. Six magazines, wherever you go! Play Store and App Store