CJ Chaudhry Steps Down After Longest Term in Pak History 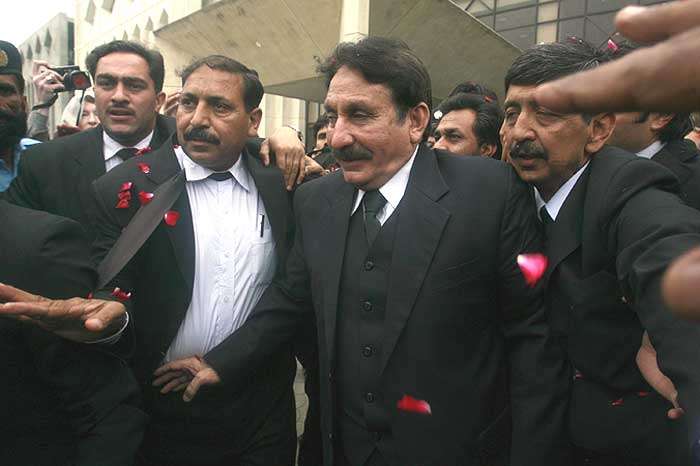 Print
A
A
A
increase text size
Outlook December 11, 2013 20:09 IST CJ Chaudhry Steps Down After Longest Term in Pak History

Pakistan's assertive and controversial Chief Justice Iftikhar Chaudhry today bid farewell to his office after the longest term at the helm of the Supreme Court in the country's history.

A meeting of the full court was held in honour of the 65-year-old Chief Justice, who retired after serving in the post for over six years.

Speaking on the occasion, Chaudhry said democracy is not possible without independent and transparent elections. The judiciary worked hard for democracy and the apex court played its role in holding polls to local bodies, he said.

In an apparent reference to the disqualification of lawmakers with fake degrees, he said it was now not possible for anyone to lie about their educational degrees and assets.

However, Chaudhry said it seemed the executive was powerless to eliminate corruption. He also hailed the media's role in the movement to restore judges deposed in 2007 by former military ruler Pervez Musharraf.

Chaudhry's retirement ended an era of aggressive judicial activism that even led to the resignation of Prime Minister Yousuf Raza Gilani, who was forced to quit after he refused to act on the Supreme Court's orders to reopen graft charges against then President Asif Ali Zardari.

The top judge was credited with making the judiciary a strong pillar and he was feared by politicians and bureaucrats.

Chaudhry built a reputation for himself through direct confrontation with the civilian government and the powerful military. He believes his legacy will continue even after he departs from the Supreme Court.

Born in Quetta on December 12, 1948, Chaudhry is the longest serving Chief Justice in Pakistan’s history. He was appointed in June 2005 but remained dysfunctional from November 2007 to March 2009.