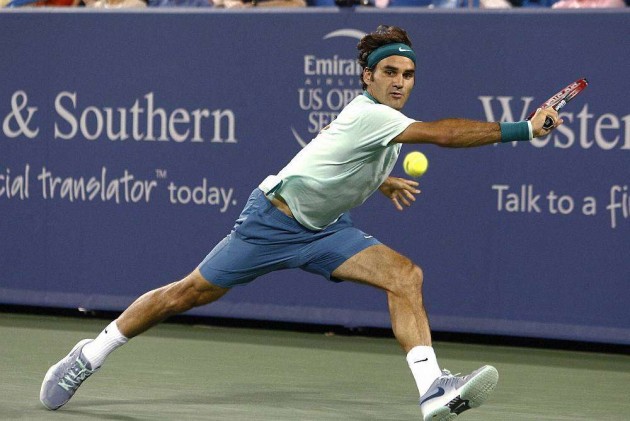 The latest came against an opponent he has dominated throughout his career. Federer improved to 16-0 against Ferrer, who has won only five sets off him overall.

It ended a bit of a slump for Federer, who finally got the large winner's trophy after losing his last four Masters title matches. He was the runner-up to Jo-Wilfried Tsonga in Toronto a week earlier.

"I've been bringing home some smaller ones," Federer said. "I'm happy to get the big one."

Earlier yesterday, Williams finally got the one that had always slipped away. And she did it so convincingly that she came away thinking another title could be coming soon.

Williams needed only 62 minutes to beat Ana Ivanovic 6-4, 6-1 for a personal breakthrough. She'd never even reached the finals in Cincinnati until last year, when she fell apart and lost to Victoria Azarenka on a third-set tiebreaker.

No wobbles this time. After getting broken in the first game, she took control with her serve and took advantage of Ivanovic's sloppy play, improving to 5-0 in finals this year.

"Definitely my best performance of the summer," she said. "Hopefully not the last. This is definitely a level that can take me to the (U.S. Open) title. I still have a lot of work to do. It's definitely a better level than I've played all year, to be honest."

Ivanovic was treated for a stomach ailment during her nearly 3-hour win over Maria Sharapova in the semifinals Saturday night. She didn't have much left against Williams, who dominated with her serve.

The only other event that Williams has played six times without a title is Sydney. She finally got her win in Cincinnati with the help of a good matchup. Williams is 7-1 in her career against Ivanovic, with the only loss coming at the Australian Open this year.

Although their last three matches have been close all going three sets -- this one was one-sided after the first few games.

Williams developed a stiff back that limited her serve in the semifinals Saturday night. She moved stiffly at the start yesterday, double-faulted in the first game and was broken -- an ominous sign. But she started moving better and took control with her serve, pulling even at 3-3. She clinched the set when Ivanovic double-faulted twice in a row.

The back problem came into play in the second set.

Williams winced after a serve in the opening game and arched her back. She stretched her back a few times between points and played through it. And Ivanovic couldn't take advantage.

"I felt it a little bit in the second, but I just was so excited for this final and to be in the final," she said. "I just really felt like I had nothing to lose. So I was able to relax."

Despite the loss, Ivanovic will move back into the top 10 in the WTA rankings with her strong showing in Cincinnati. "It's the biggest final I've been in in a while. It feels good to be part of it," she said. "There are still a few points in my game that I feel I need to work on for the U."