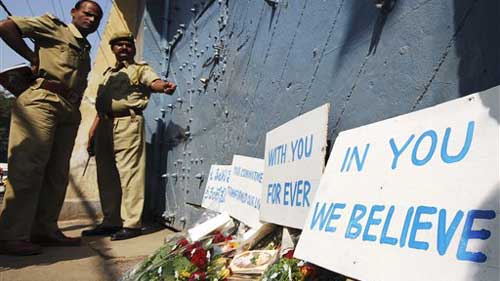 After nine days in jail, Chairman of Satyam's tainted ex-chairman B Ramalinga Raju, his brother and ex-MD Rama Raju and former CFO V Srinivas were on Sunday taken into custody by the Andhra Pradesh CID and questioned, as the Raju family-promoted Maytas got some relief.

Chief Minister Y S Rajasekhara Reddy meanwhile met External Affairs minister Pranab Mukherjee in New Delhi tonight and later said he was ready for "any probe by any agency" of the country into the Satyam scam as credibility of the nation has taken a beating due to the multi-crore fraud.

All the three accused were brought from the Chanchalguda jail here to CID's office at A C Guards for further interrogation into the Rs 7,800-crore financial fraud, allegedly engineered by Ramalinga Raju.

A local court yesterday granted permission to the CID, investigating the Satyam fraud, to take the trio into custody for four days for further interrogation. A five-member CID team led by N Balaji Rao, escorted the three accused out of the jail at around 1145 AM amidst tight security.

Ending speculation that Maytas contracts may be terminated, the AP government announced it was neither going to cancel the projects awarded to Maytas Infra in haste nor going to order a probe into projects won by the firm.

State Finance Minister K Rosaiah said in Hyderabad, "We shall not act in haste. The government's duty is to wait and see. If any of the projects are revoked, the government will have to pay a heavy penalty."

"All the projects have been awarded in the most transparent manner, following due procedures," said Rosaiah, who is also the state Cabinet spokesman, noted.

Different government departments were "closely watching and studying" the developments on a "daily basis", he said while ruling out any probe into Maytas projects saying there was "no necessity".