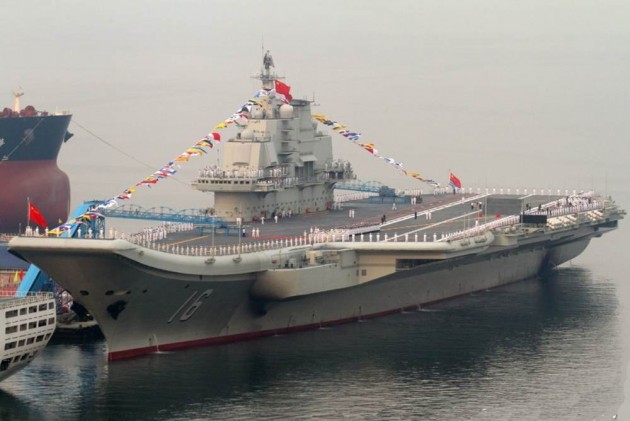 "A naval formation consisting of the aircraft carrier Liaoning on Thursday passed through the Taiwan Straits en route to the South China Sea for drills and tests," said Liang Yang, spokesperson with the People's Liberation Army Navy.

"The Liaoning and other naval vessels in the formation were scientifically organised and meticulously operated during the navigation," he was quoted as saying by the state-run Xinhua news agency.

This is the first official reaction from China since Taiwanese media reported on Liaoning's activities on Tuesday, which prompted the island's military to dispatch F-16 fighter jets to monitor the movements of China's only aircraft carrier.

Notably, the development comes just days after Taiwan's President Tsai Ing-wen visited the US en route to Central America, despite protests from Beijing, and met with Senator Ted Cruz, who lost to Donald Trump in the Republican presidential primary contest.

Earlier, US President-elect Trump has spoken with Tsai, in a major break with Washington's policy on China, triggering protest from Beijing.

Zhang Junshe, a senior research fellow at the PLA Naval Military Studies Research Institute, told state-run Global Times that the Liaoning battle group's movement in the area showed that the aircraft carrier is combat ready, which is good news for the Chinese people, but those who want to separate China's territory and support Taiwan independence will surely be afraid.

Since it was commissioned in 2012, the Liaoning has been carrying out training and tests steadily, the navy said.

The Liaoning is China's only aircraft carrier in operation. It was refitted based on an unfinished carrier from the former Soviet Union.

China claims the breakaway province of Taiwan as part of mainland and the ruling-Communist Party has vowed to retake the island, if necessary, by force.

Under a landmark 1979 agreement, the US has recognised the People's Republic of China, breaking its decades-old diplomatic ties with Taiwan.

The US remains Taiwan's biggest arms-supplier and main supporter.