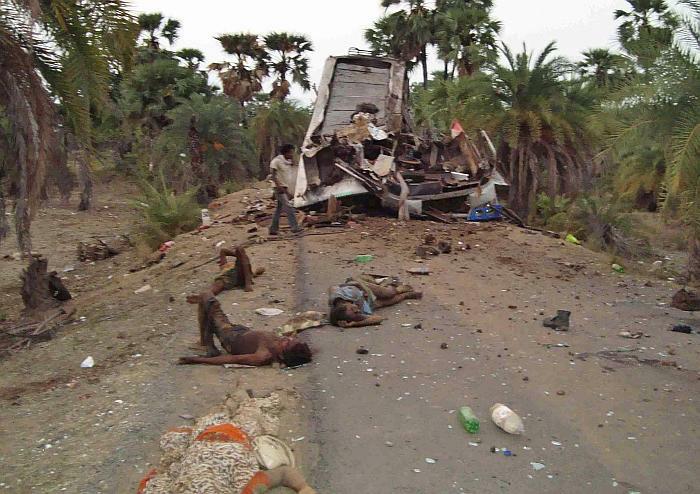 Dead bodies lie at the side of the road with the wreckage of the bus in the background in Dantewada district, about 560 kilometers south of Raipur, the capital of Chhattisgarh.
AP Photo

Print
A
A
A
increase text size
Outlook May 18, 2010 11:53 IST Chhattisgarh on Top Alert After Deadly Naxal Attack

outlookindia.com
-0001-11-30T00:00:00+0553
A day after the killing of 35 bus passengers by Naxalites, Chhattisgarh was on high alert as security forces today intensified combing operations in the affected Dantewada region where many panic-stricken bus operators were refusing to ply their vehicles.

Amidst heart-rending scenes, near and dear ones of the victims, who included 14 special police officers, carried out the last rites of the bodies, some of whom were badly mutilated.

Chhattisgarh Governor Shekhar Dutt, Chief Minister Raman Singh, Home Minister Nankiram Kanwar and Director General of Police Viswa Ranjan visited Sukma, 450 kms from here, the place where the Maoists triggered a landmine to blow up the bus. They paid their last respect to the victims.

The state, where 75 CRPF men and a local policeman were killed in a Naxal attack on April 6, was on top alert in the wake of the fresh killings and a call by the ultras for a two-day bandh in Chhattisgarh, Bihar, Orissa, Jharkhand and West Bengal from today to protest the operations against them by the security forces, officials said.

Paramilitary and state police forces intensified combing operations in the Dantewada region, which had been facing the brunt of the Naxal strikes, they said.

The Centre had on Monday asked the five state to tighten security and take maximum precautions during the bandh. As part of the precautionary measures, the railways stepped up vigil across its network and cancelled some trains in addition to imposing speed restrictions for night travel.

Of the 35 killed, 21 were civilians. The condition of five among the 27 injured is critical, the officials said.

With the Naxals having earlier warned private vehicles against accommodating security forces, panic-stricken private bus operators in the area were today refusing to take out their vehicles.

Meanwhile, Union Home Minister P Chidambaram made a fresh officer of talks with the Naxals if they "suspend" violence even for 72 hours.

The Chhattisgarh Chief Minister told reporters in Sukma that the Naxalites killed the bus passengers in retaliation to the operations launched by the security forces against them.

Singh, who flew to Sukma in a helicopter and met some of the injured in a hospital, said the effort of the government was to ensure that the ultras did not succeed in undermining the morale of the security personnel.

He said he would shortly be taking up with Prime Minister Manmohan Singh and Chidambaram the issue of evolving effective measures to deal with the Naxal menace. "A new strategy should be worked out as the Naxals were training their guns at the common people besides the security forces," he said.

The Chief Minister said the state government will ascertain if there were lapses on the part of the security forces in the latest Dantewada attack.

A private commercial bus ferrying passengers from Dantewada to Sukma was blown up between Gadiras and Bhusaras near Chingavaram village, about 450 KMs from here, on Monday with the Naxals detonating improvised explosive device containing gelatin sticks planted on the metalled road.

The bus was targeted after the Naxals got to know that SPOs were on the bus. Some of the SPOs were also said to be travelling on the rooftop of the bus.

According to senior police officials, the Naxals had opened fire after triggering the IED. 47 rifle cartridges were recovered from the spot indicating that the military wing of the Naxalites were involved in the attack and the ultras wanted to kill the survivors.

State Police Chief Viswa Ranjan had on Monday said about 100 SPOs had gone to Dantewada on May 15 for an anti-Naxal operation. Some of them returned by the bus. Under the Standard Operation Procedures, security personnel have been advised not to use civilian vehicles.

SPOs are mostly local people recruited to fight the Maoists and have emerged as the biggest threat to the ultras.