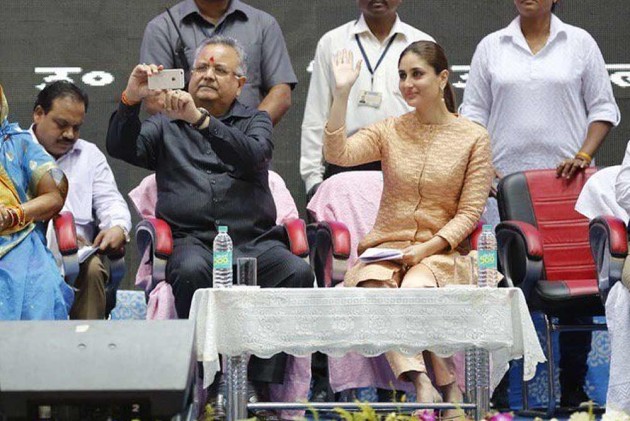 The main opposition Congress accused the Chief Minister of being insensitive towards the incidents of farmers' suicide in the state and engaged in taking pictures with a Bollywood star.

Kareena, who is the UNICEF India celebrity advocate, was a special guest in a programme based on child rights at the state capital Raipur jointly organised by Unicef and state's School Education and Women and Child Development Departments.

CM Singh who was the chief guest in the programme was caught on camera taking selfie with Kareena while sitting on the stage.

"More than a dozen farmers, distressed with drought situation (in the current Kharif crop season), have so far committed suicide in the state. Instead of expressing concern for them, CM was busy in taking selfie with a film star," state Congress chief Bhupesh Baghel said.

He further questioned CM, what he wanted to prove by taking selfie with Kareena Kapoor.

Meanwhile, a senior administrative official pointed out that the CM usually clicks pictures with children and guests during his programmes and today also he did the same.

As many as 31 meritorious girl students and 5 teachers from 36 schools were felicitated with "Chhattisgarh Ratna" in the programme.

Continue FREE with Ads Pay Rs. 1 to Read Without Ads
READ MORE IN:
Kareena Kapoor Raman Singh National
Next Story : Who Will Win by End of 2015, Modi or Bachchan, Asks Twitter
Download the Outlook ​Magazines App. Six magazines, wherever you go! Play Store and App Store