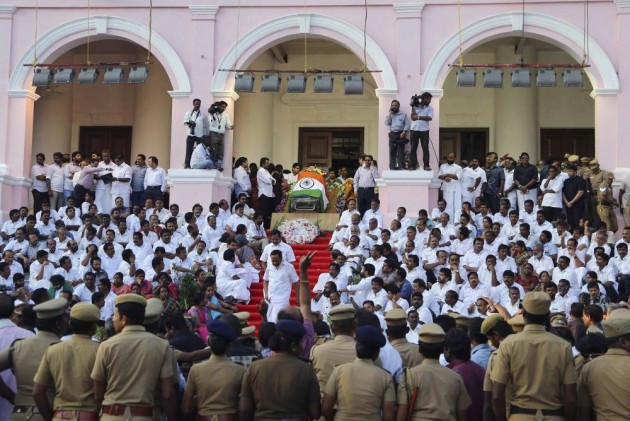 Life virtually came to a grinding halt here as the city woke up to deserted streets with shops, including eateries, remaining shut in the wake of the demise of Tamil Nadu Chief Minister J Jayalalithaa.

The focus today turned to Rajaji Hall where Jayalalithaa's body is lying in state to enable public pay their homage.

With even tea stalls, which usually do a brisk business in the early hours, remaining closed, mobile tea vendors could be seen dispensing the brew at some places. Hotels are also closed.

Suburban train services, however, were being operated in the city, albeit with lower passenger rush.

Long distance trains arriving at Chennai Central and Egmore stations were on time.

The state government has declared a holiday today for its offices and three-days for educational institutions as a mark of respect to the departed leader.

A report from Madurai said the entire temple city mourned Jayalalithaa's death with all shops closed and transport facilities including buses and auto rickshaws off the roads.

"The entire city is calm...Silent..," a police official said.

Officials said those who reached Madurai by train and flight this morning took private transport to reach home.

The main bus stands wore a deserted look. Inter-state and long distance government buses bound here from various destinations, including from Kerala and Karnataka did not arrive as they had been stopped at the borders.

Fishermen colonies mourned the death of Jayalalithaa in Tuticorin, Rameswaram and Kanyakumari.

Police said there was no untoward incident in the region.

Meanwhile, a report from Coimbatore said all shops, commercial establishments, tourist spots remained closed in this and neighbouring Tirupur and Nilgiris districts as a mark of respect to the departed Tamil Nadu Chief Minister J Jayalalithaa today.

Transport facilities like buses and auto rickshaws stayed off the roads in these districts, where a bandh like situation prevailed, police said.

In Nilgiris district, a few tourists were badly hit due to closure of shops and hotels, they added.

AIADMK workers were seen paying homage to the portraits of their "AMMA" by erecting pandals at road sides across these districts, even as adequate police forces were deployed to meet any eventuality.

Much to the relief of police, various Muslim and Hindu outfits have cancelled their demonstrations to protest and celebrate the demolition of Babri Masjid today.

A report from Puducherry said, a bandh-like situation prevailed in the union territory with all shops and commercial establishments remaining closed as a mark of respect to the departed soul.

All inter-state and intra state government buses and autos were off the roads with the fleet operators deciding to suspend transport services.

The tricolour flew at half mast atop government buildings including the Assembly and Rajnivas in keeping with the order of the Puducherry Administration to observe a three-day mourning from today.

Meanwile, former Chief Minister of Puducherry N Rangasamy (AINRC) who condoled the late Tamil Nadu Chief Minister's death, said, as an "iron lady" she persisted in procuring justice to the downtrodden and the havenots.

He conveyed his condolences to the rank and file of the AIADMK.

CPI Puducherry unit Secretary R Viswanathan expressed grief over the death of Jayalalithaa and recalled the various progressive measures she had implemented during her tenure with relentless courage, perseverance and uncompromising zeal.

Continue FREE with Ads Pay Rs. 1 to Read Without Ads
READ MORE IN:
J. Jayalalitha National
Next Story : Adani To Start Work at Australia Mine by Mid-2017
Download the Outlook ​Magazines App. Six magazines, wherever you go! Play Store and App Store