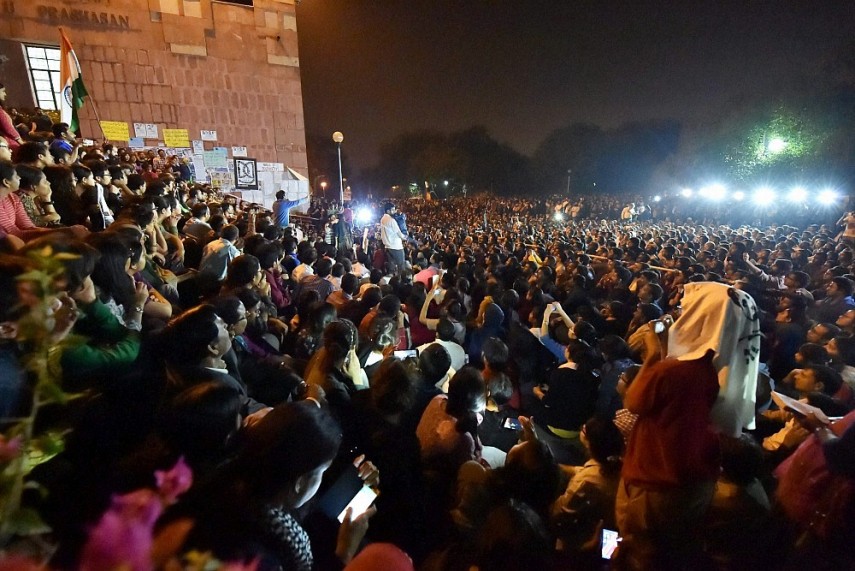 Chaos prevailed in JNU campus today with various student groups staging protests over the issue of a student missing from the varsity hostel under mysterious circumstances.

A student of School of Biotechnology, Najeeb Ahmed, allegedly went missing on Saturday following a brawl on the campus the night before. An FIR for kidnapping and wrongfully confining a person was lodged at Vasant Kunj North police station yesterday after the police received a complaint from the student's guardians.

Najeeb's mother and local guardians also joined the protest today alleging that they were not informed by the administration about him going missing.

Asserting prompt action, the JNU administration issued a statement saying, "The JNU security has been instructed to immediately look for the missing student. The dean gave a written instruction to all wardens to search hostel rooms."

"Police also visited the campus and investigated the matter. The administration is in constant touch with police to facilitate the investigation," it added.

The left-affiliated groups on campus on the other hand accused the RSS student wing ABVP of making attempts to "terrorise" the student community.

"There are repeated efforts to terrorise the student community in the Mahi-Mandavi hostel continuously. Yesterday, a wardens meeting to prepare a report of the incident was also repeatedly disrupted by ABVP members," a statement by the JNU Students Union said.

An AISA activist said Najeeb, who joined the hostel a fortnight ago, had an altercation with some ABVP activists on Friday night when they were holding a door-to-door campaign at the hostel for the mess committee election.

Najeeb allegedly slapped a student following which residents of the hostel asked him to vacate his room.

However, the activist alleged, "It all started with a scuffle between two groups of students but then an entire group of ABVP activists came to avenge it and beat him up," the activist said.

All those who tried to save him, including the warden, JNUSU President and hostel residents were also beaten up.