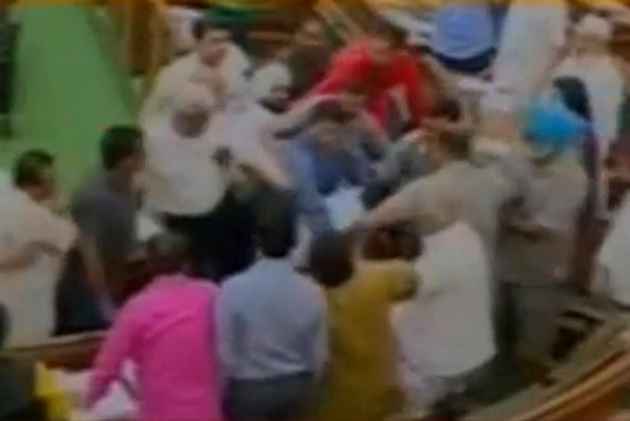 Print
A
A
A
increase text size
Outlook May 31, 2017 15:30 IST Chaos At Delhi Assembly: 'Punched In The Chest', Kapil Mishra Alleges Attack by AAP MLAs

High drama prevailed at the Assembly when a few AAP MLAs and sacked minister Kapil Mishra came to blows as the latter held out a banner with allegations of corruption against Chief Minister Arvind Kejriwal.

Party MLAs, including Madan Lal, Jarnail Singh, were seen lunging at Mishra and dragging him as he raised a poster referring to the allegations, before Speaker Ram Niwas Goel ordered him to be marshalled out of the House.

Later, Goel adjourned the House, which was convened to pass the state GST bill, for 15 minutes.

"I was not allowed to speak. The moment I attempted to speak, four to five AAP MLAs started hitting me. It is perhaps for the first time that MLAs have been used to muffle a dissenting voice inside the House," Mishra told reporters.

Mishra also alleged Deputy Chief Minister Manish Sisodia was behind the entire episode, saying the MLAs rushed towards him after he "prompted" them to do so.