Chandraswami Cremated, With Little Fanfare And No VIPs 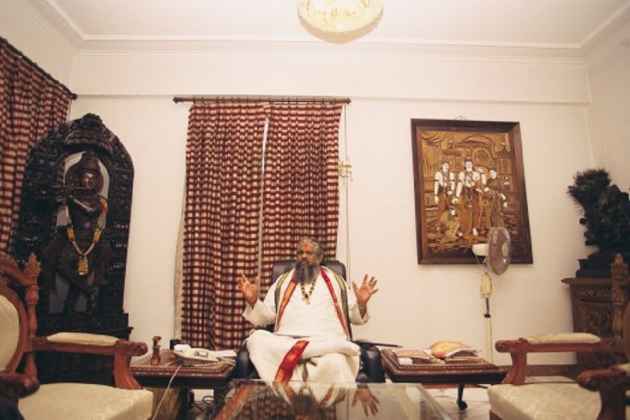 Print
A
A
A
increase text size
Outlook May 24, 2017 14:45 IST Chandraswami Cremated, With Little Fanfare And No VIPs

The mortal remains of controversial godman Chandraswami were consigned to flames at Nigambodh Ghat here on Wednesday -- a quiet farewell to a man who once counted the mighty and powerful as his friends.

Neeraj Shekhar, son of late prime minister Chandra Shekhar with whom Chandraswami was closely linked, attended the cremation along with his nephew and followers of the spiritual leader, who died at the age of 66 of multi-organ failure at a Delhi hospital on Tuesday.

No other prominent people were present at the cremation of the astrologer and tantrik who once included among his friends and disciples heads of states, prime ministers and kings of several countries, prominent politicians and Hollywood celebrities.

Chandraswami was considered close to late prime minister PV Narasimha Rao and was probed for his alleged role in plotting and financing the killing of Rajiv Gandhi by the Jain Commission of Inquiry which went into the conspiracy aspects of the assassination.

Controversy's favourite child, the self-proclaimed godman in flowing silk saffron robes and sporting a tilak on his forehead, faced a string of criminal cases--ranging from FERA violations and blackmail to cheating and shady arms deals.

He became close to Narasimha Rao who was a minister in the Indira Gandhi and Rajiv Gandhi cabinet but his fortunes soared when Rao became prime minister.

Soon after, Chandraswami built an ashram -- Vishwa Dharmayatan Sanathan -- in Delhi's Qutub Institutional Area. The land for the ashram was said to have been allotted by Indira Gandhi.

ALSO READ: 'The Swami Used To Give Us Money'- An Interview With Dawood's Right-Hand Man

An income-tax raid on his ashram is reported to have uncovered original drafts of payments of millions of dollars to Khashoggi, who was allegedly implicated in the "Iran–Contra affair" as a key middleman in the arms-for-hostages exchange along with Iranian arms dealer Manucher Ghorbanifar.

According to reports, Thatcher, who was known for her no-nonsense approach, conversed with Chandraswami in 1975 in her Commons office.

Thatcher, who later became the prime minister of Britain, was apparently so impressed with his "powers" that she agreed to his request to wear a special red dress and a battered talisman around her wrist to a second meeting.

In May 2009, the Supreme Court of India granted Chandraswami permission to travel abroad, lifting a ban on overseas travel imposed as a result of his alleged involvement in the Gandhi assassination case.

In June 2011, Chandraswami was fined Rs 9 crore by the apex court for FERA violations.

The Jain panel had recommended further investigation into several areas, including Chandraswami's role in the Gandhi assassination, which could not be investigated fully as the panel had to wrap up its probe in 1998.