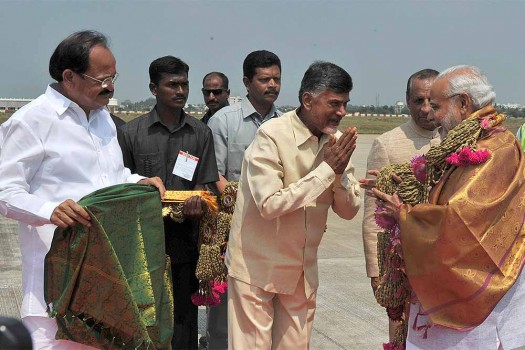 A day after making critical remarks on demonetisation, Andhra Pradesh Chief Minister N Chandrababu Naidu today said his comments were "distorted" and that he has been supporting the exercise.

He, however, said problems arising in the aftermath of demonetisation "continue" as "we are going (about them) in a routine manner".

"We have to take an innovative approach," he remarked.

He heads the panel set up by the Centre to look into issues arising from demonetisation. His party- TDP- is part of the NDA government.

The 13-member committee would meet again on December 28 to work out solutions to the ongoing problem, he said.

"I spoke to (NITI Aayog CEO) Amitabh Kant this morning and asked him to convene the meeting," he said.

He said he had sought a ban on high denomination notes "long ago" and written a letter to the Prime Minister seeking abolition of 500 and 1,000 rupee notes after the recent Income Disclosure Scheme.

"I have supported this (demonetisation) concept," he said, inaugurating a two-day conference of district Collectors here.

Addressing a workshop of Telugu Desam MPs, legislators and leaders here yesterday, he had said, "Demonetisation was not our wish but it happened. More than 40 days after demonetisation, there are still a lot of problems but yet there appears to be no solution."

"I am spending two hours daily to ease the problems caused by demonetisation. I am breaking my head daily but we are unable to find a solution to this problem," he had said.

He claimed that his remarks were "distorted by some".

"I am disgusted with the way money is distributed during elections. Why should we spend money in elections? That's why I wanted a ban on big notes," Chandrababu said.

"In my life, I did not focus on anything as much as I focused on demonetisation. I troubled the bankers, RBI and the district Collectors by reviewing the situation for hours every day. But still things did not happen as fast as we wanted," he said.

"There is attitude problem. We could not make use of the available infrastructure and we could not innovate," he said, referring to the problems being faced by people in the aftermath of note ban.

"I am totally pained that we could not distribute welfare pensions on time this month. I was so angry. I gave a warning to the banks and then the RBI acted. From now on, we will distribute pensions physically and not through banks," the Chief Minister said.

He also spoke on other topics like growing number of divorces in the US, the problem of aged population in Japan and of ageing population in China and the advantage India has in terms of "demographic dividend".