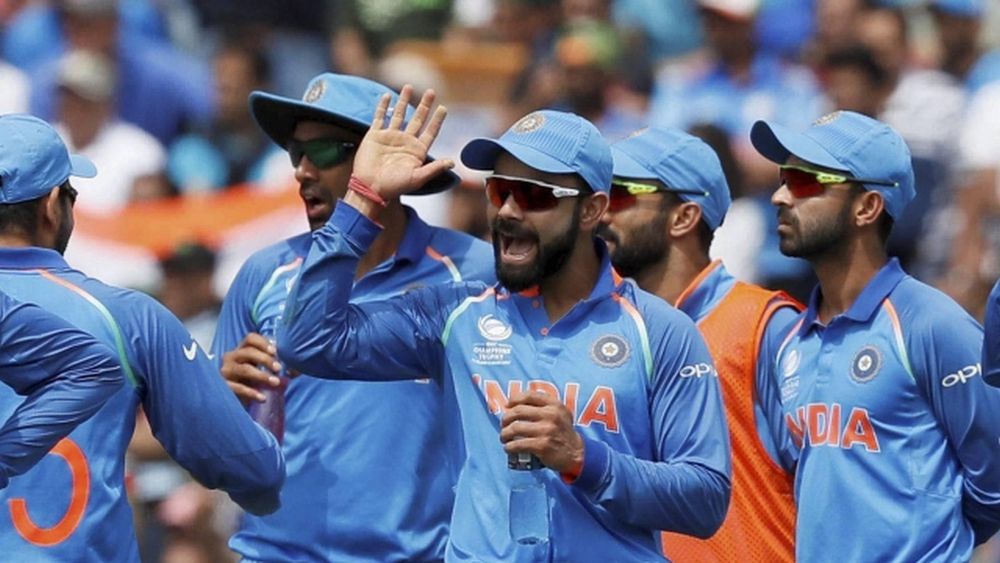 Rohit Sharma stamped his class with an authoritative hundred in the company of magnificent Virat Kohli as India annihilated Bangladesh by nine wickets to set up a bumper summit showdown with arch-rivals Pakistan in the Champions Trophy, here today.

The lazy elegance of Rohit (123 no off 129 balls) coupled with the unmatched swagger of skipper Kohli (96 no off 78 balls) ensured India treat Bangladesh's attack with utter disdain, knocking off a modest target of 265 in 40.1 overs.

This was after some inspired bowling changes from Kohli, including the introduction of part-time off-spinner Kedar Jadhav, which changed the complexion of the game with Bangladesh managing only 264 for seven in 50 overs.

A miracle was needed for the over-rated mediocre pace attack to stop the Indian line-up. That didn't happen as Rohit and Shikhar Dhawan (46) added 87 for the opening wicket.

And then came skipper Kohli, who treated the opposition attack as a bunch of net bowlers, adding 178 runs for the second wicket off 153 balls.

The Indian captain also reached a personal milestone of 8000 ODI runs in his 183rd match.

Rohit's innings will be remembered for those pull shots and the amount of time he had to execute each one of them.

But Kohli's innings will be specifically remembered for two shots, or rather two pushes, off Mustafizur Rahaman -- they were the best of the Indian innings.

One that went straight past the bowler and the other was pushed through the vacant mid-off area. It was the best way of showing who the boss is.

The gulf between the two teams was evident in the manner the Indian batsmen toyed with the Bangladesh attack.

Anything short outside the off-stump was cut with ferocity. If the short ball was on leg and middle, it was dutifully pulled by Rohit, Kohli or Dhawan.

They played all sorts of pull shots – Rohit primarily hit behind the square, Dhawan through the square and Virat in front of the square.

Rohit, who is playing his first international tournament in six months, once again showed during his 11th ODI hundred as to why he is so highly rated.

There were 15 boundaries and a hooked six off Mustafizur brought up his hundred. Kohli, who finished the match with a boundary, hit 13 of them in all.

Jadhav's 2/22 in six overs brought India back in the game as he took the crucial wickets of Tamim Iqbal (70) and Mushfiqur Rahim (61) with his fastish off-breaks.

The two wickets proved to be the difference as Bangladesh only crossed the 260-mark instead of a projected 310 after Tamim and Rahim had added 123 runs for the second wicket in 21.1 overs.

Once Kedar was done with his job, Jasprit Bumrah (2/40 in 10 overs) played his regular part to perfection, stifling the opposition with as many as 40 dot balls.

The third powerplay (41-50) saw Bangladesh scoring only 62 runs, primarily due to a cameo from skipper Mashrafe Mortaza (30 no off 25 balls).

Bumrah's senior partner Bhuvneshwar Kumar (2/53) complemented him well with a couple of dismissals first up.

Bangladesh lost the momentum when Jadhav first got rid of the dangerous Tamim, who tried an ugly slog sweep to a delivery that was fired down the middle and leg. He missed the line completely to be bowled.

In a space of few overs, Jadhav was back in thick of things, this time getting Rahim to drive uppishly that went straight to Kohli at mid-wicket.

Jadhav was an inspired choice for Kohli as his fifth bowler Hardik Pandya had an off day, giving away 34 in his four overs, including an over in which he got Tamim out twice - caught off a free-hit and then bowled off a no-ball.

Ravindra Jadeja (1/48 in 10 overs) got Shakib Al Hasan (15) caught by Mahendra Singh Dhoni between the dismissals of Tamim and Rahim.

From 154 for two, Bangladesh slumped to 179 for five, again fluffing their lines during the crucial death overs.

It was Bumrah who took charge during the death overs. He scared the hell out of Mosaddek Saikat (15) with a barrage of short balls, which got him a simple caught and bowled.

Bangladesh's last hope for a big score was Mahmudullah Riyadh (21), who got a perfect yorker and he could have done nothing about it.

Earlier, both Tamim and Shakib didn't take too many risks but got the scoreboard ticking, raising hopes of a big total when they were comfortably placed at 154 for two.

Tamim's 82-ball innings had seven fours and a flicked six off Pandya, while Rahim hit four boundaries in his 85-ball knock. After three successive boundaries off a Bhuvneshwar over, Rahim was more keen on rotating the strike.

They, in fact, negotiated Ravichandran Ashwin (10-0-54-0) well without taking any undue risks. While Ashwin bowled 27 dot balls, he did not bowl any wicket-taking deliveries. But it hardly mattered in the end.