Centre Taking All Steps to Protect Country: Rajnath on IS 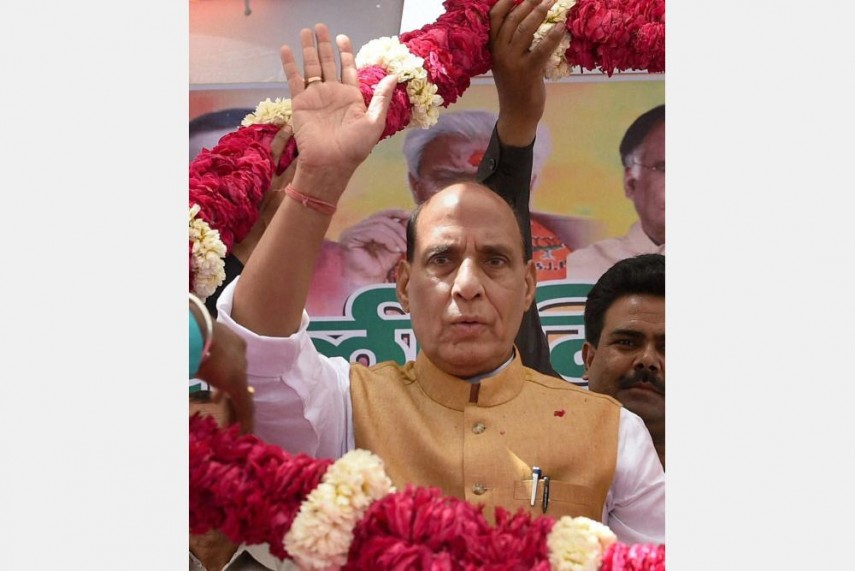 Print
A
A
A
increase text size
Outlook May 21, 2016 15:38 IST Centre Taking All Steps to Protect Country: Rajnath on IS

Union Home Minister Rajnath Singh today said the Centre is taking all steps needed to protect the country and asserted that the people of all religions and castes will fight the terror forces "with all their might".

He was asked about terror group Islamic State (IS) reportedly threatening in a video to take revenge over Kashmir, demolition of Babri mosque and communal riots in Gujarat and Muzaffarnagar.

"We are taking whatever steps need to be taken to keep this country secured. And I feel all people of this country have a sense of confidence...People of all castes, religions will fight the terror forces with all their might," Singh told reporters on the sidelines of 'International Buddha Poornima Diwas Celebration' organised here.

Minister of State for Home Kiren Rijiju, who also attended the celebrations, asserted that such type of "propaganda" videos by terror outfits will not be able to influence the people of the country.

"These kinds of propaganda videos keep coming. ISIS or whoever propagating these kind of things is not going to influence the minds of the people of India.

"The people of India have decided that they will not allow these kinds of activities to take root in the country," he said.

Singh, during his speech at the event, said: "These days conflicts among persons, within societies and religions, are on the rise. The solution to these crises can be found in Buddha's message.

"It also has solutions for terrorism and extremism. How can the number of such incidents increase if all start believing in non-violence?"

He said no religion "contradicts" another, but they "complement" each other.

"I know some separatist elements try to create wedge between communities. This should not happen.

"In Hindu religion, Lord Buddha is considered as the ninth avatar (incarnation) of Lord Vishnu. So, his birth anniversary is important not only for followers of Buddhism, but Hindus too," he said.

Singh said B R Ambedkar too was influenced by Buddhism and, therefore, accepted it as a religion. The values of Buddha like compassion, non-violence and harmony "are reflected in the Constitution which Ambedkar drafted".

"The democratic shape he (Ambedkar) gave to our set up was under the influence of Lord Buddha's message," Singh said, and added "those aware of history know that first republic in India was in Buddha's Vaishali".

He said Buddha's message offers solutions to the problems of environment too.

Kushwaha said the Narendra Modi Government at the Centre was committed to spread the message of Lord Buddha in the world.

He observed that a "good message" can spread effectively those in power too follow it and cited the example of how Ashoka, an emperor of Maurya Dynasty, had done it.

On the occasion, Kushwaha also demanded that Patna be renamed as Pataliputra, a name by which it was known during the emperor's regime.

"We want to reignite the memory of Ashoka. (To do that) Patna should be renamed as Pataliputra. His birth anniversary should also be observed as public holiday so that we can remember Emperor Ashoka and Lord Buddha's message too," he said.

Sharma said the Government has already expressed its resolve to spread Indian culture and message of Buddhism in the world and also spoke about his Tourism and Culture Ministry's Swadesh Darshan scheme under which Buddhist tourism is being developed in the country.

"We will connect all places relating to Buddha and give a special identity to Buddhist tourism. Buddha's message is a big gift from India to the world," he added.

Rijiju underscored the need of understanding Buddha's message of peace to end violence in the world and referred to the Prime Minister's statement made at a similar event last year that India can become great if it walks on the path showed by him.

Secretary general of International Buddhist Confederation, an umbrella body of Buddhist organisations, Lama Lobzang and Culture Ministry secretary NK Sinha were also among those who attended the event.