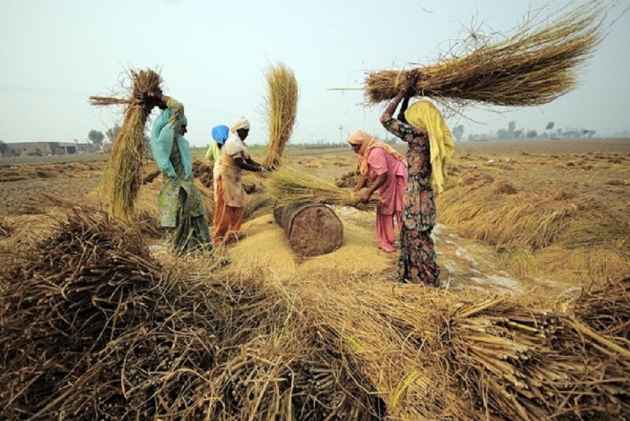 The Centre today approved Rs 795.54 crore funds to Karnataka for providing relief to farmers who lost their rabi (winter) crops in 2016 due to severe drought.

A decision in this regard was taken in the High-Level Committee (HLC) meeting, headed by Home Minister Rajnath Singh. Finance Minister Arun Jaitley, Agriculture Minister Radha Mohan Singh and senior officers were also present at the meeting.

The HLC approved the assistance from the National Disaster Relief Fund (NDRF) in respect of Karnataka to the tune of Rs 795.54 crore, an official statement said.

The assistance to Karnataka is given in the wake of drought (Rabi) of 2016-17 crop year (July-June).

The two ministers had met Rajnath Singh just before the HLC meeting and demanded an early decision on the drought relief for the state.

"We are glad the HLC meeting was scheduled for today and the decision has been taken. Though the relief amount is lower than our demand, it is higher than Rs 607 crore sanctioned for rabi crop loss in 2015-16," Gowda said.

He hoped that there was no further delay in the release of this amount to the state.

"There is always delay in sanctioning of the funds after the HLC decision. There was three months delay in the release of drought relief funds for Kharif crop loss in 2016-17," the minister said.

Early release of funds will benefit farmers, who are preparing fields for the Kharif sowing in the current year. The state is ready with the technology platform for "transparent" transfer of relief funds directly to the bank accounts of the affected farmers, Gowda said.

After three consecutive years of drought, the state has received fairly good rains so far except in 7-8 districts. The state is keeping a close watch on monsoon and taking all measures to help farmers during the ongoing sowing season of summer (Kharif) crops, he added.

Continue FREE with Ads Pay Rs. 1 to Read Without Ads
READ MORE IN:
National
Next Story : If Indian Prez Can Work Beyond 70, Why Can't We Be In BCCI, Says 'Disqualified' Niranjan Shah
Download the Outlook ​Magazines App. Six magazines, wherever you go! Play Store and App Store