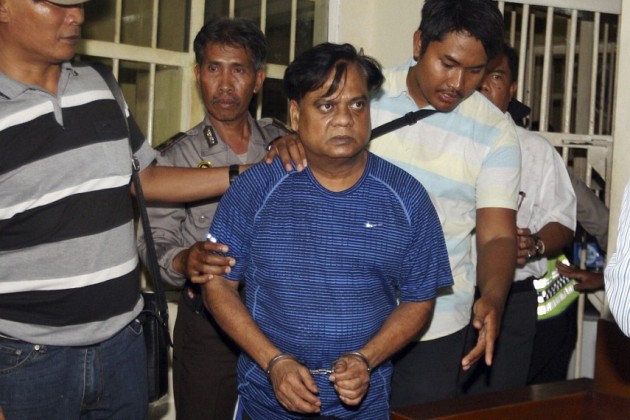 CBI has taken over investigation in three cases of alleged murder and extortion, purportedly masterminded by gangster Chhota Rajan.

The gangster, who is in custody here following his deportation from Indonesia in 2015, is being booked by CBI on the request of Maharashtra government and further notification from the Centre.

The CBI had taken over a case of alleged murder and other two cases of extortion against Rajan, who is a former key aide of dreaded don and Bombay blasts main accused Dawood Ibrahim.

Giving details of the case, CBI Spokesperson R K Gaur said, the first case (of extortion) was earlier registered at Nirmal Nagar in Mumbai (Maharashtra) against unknown persons in April 1999.

"It was alleged in the complaint that during the period from March 2, 1999 to April 8, 1999, the unknown accused persons identifying themselves as Rohit, John, Ashok, etc of Chhota Rajan gang made telephonic calls to the complainant and threatened him with dire consequences to extort money to the tune of Rs 25 lakh (approx)," he said.

Gaur said, in this case, provisions of MCOC Act, 1999 were subsequently applied by the local police.

In the second case registered at Police Station Tilak Nagar in Mumbai against two unknown persons, it was alleged that on October 7, 1998, when deceased Bala Kotiyan along with his friend was sitting at Navgrah Hotel, two unknown persons holding revolver and pistol entered the hotel shot him dead, he said.

In the third case, Gaur said, it was alleged that on July 31, 2004 accused persons with common intention forcibly entered in the office of complainant at Mulund posing themselves as the gang members of Chota Rajan and assaulted complainant and his servant and demanded money at gun point.

"The accused also damaged mobile phone/remote of the complainant. In this case, provisions of MCOC Act, 1999 were subsequently applied by state police," he said.

Rajan was detained by Indonesian Police in Bali on his arrival from Australia following a Red Corner Notice by the Interpol. He was later deported to India on November 6, 2015.