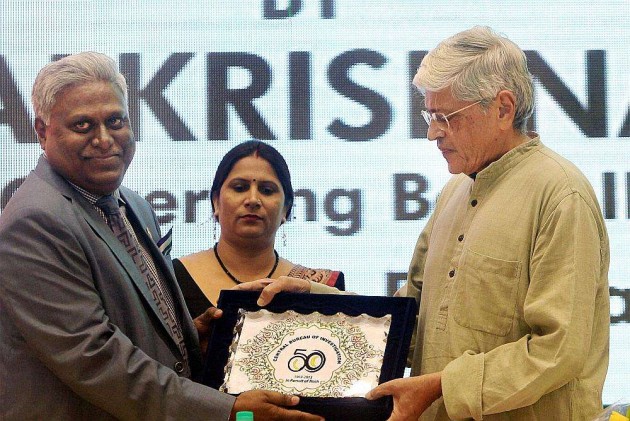 CBI was in for some harsh words today when former Governor of West Bengal Gopalkrishen Gandhi said the central probe agency had gained notoriety as "as government's hatchet" and "Department of Dirty Tricks" which was clothed in "opacity" with perfume of "mystery".

Delivering 15th D P Kohli Memorial Lecture today, Gandhi, who was CBI's guest speaker, minced no words while batting for bringing the agency within the purview of Right to Information Act (RTI) and making it "spectacularly" and not "sensationally" autonomous.

"It is seen as government's hatchet, rather than honesty's ally. It is often called DDT -- meaning not the dichloro diphenyl trichloroethane, the colourless, tasteless, odourless insecticide it should be, but the Department of Dirty Trick"," he said at the function where the entire CBI rank and file led by its Director Ranjit Sinha were present.

Referring to the issue of corruption, 69-year-old Gandhi, who is at present Chairman of Indian Institute of Advance Studies (IIAS), said CBI has a "mixed" image, not all of which was "flattering", and it will have to "change". He said the "RTI-trained" public will expect, prod and make the CBI an "instrument of change".

"The CBI is clothed in opacity, then ornamented by secrecy and finally perfumed by mystery." Gandhi pointed out that for sometime the CBI had come under RTI purview and during that period "heavens did not fall" but the opacity, secrecy and mystery made it move out of the Act.

"This is a great pity. The CBI is about investigations into corruption and certain crimes. It is not security or intelligence agency," he said while delivering a lecture on "Eclipse at Noon: Shadows over India’s Conscience".

The lecture marked the formal closing of the year long golden jubilee celebration of CBI.

Gandhi, a former IAS officer of Tamil Nadu cadre, said the perception about CBI being a department of dirty tricks needs to change.

"I will make a bold statement to say it will change, because the popular mood in the country in the matter of corruption has changed. The post-RTI India is an altogether new India. Every village in India has heard of the RTI and, what is more, it has used RTI, sometimes frivolously, sometimes perversely but, in the main part, transformationally and cleansingly."

He said the RTI-trained public is no longer going to take corruption as a standard feature of the administration. It will expect, prod and make the CBI be an instrument of change. The CBI is going to play a big role in the future of India's public.

"The CBI has nothing to lose and everything to gain by partnering the people of India," he said.

Touching upon the point of granting autonomy to the CBI, Gandhi said he favoured a "spectacularly autonomous" and not "sensationally" autonomous.

He said the CBI probes were often directed against very senior government officials and politicians who wield great influence.

"They have to be handled judiciously and without fear or favour. This is why the CBI requires autonomy and an assurance of protection against the capriciousness of highly placed individuals. Unfortunately, but predictably, successive governments have been reluctant to sanction that order of autonomy," he said.

About the judiciary, the former bureaucrat said, "Thank God for the judiciary," and vital interventions by the Supreme Court in 1997 which brought about some sort of autonomy in the CBI.

"The standard politician does not and will never like an autonomous CBI. There is an irony in this," Gandhi said.

In a veiled attack on CBI in cases of booking senior bureaucrats like former Coal Secretary P C Parakh, he said, "There is justified criticism of CBI highhandedness and lack of sensitivity to loss of reputation of senior members of the bureaucracy against whom needless enquiries can get initiated."

He said at times the CBI is used as a tool to force civil servants to fall in line with an unscrupulous Executive, pressure. "No political party is a saint in this matter. But the CBI cannot afford to be complicit in this capriciousness. It must resist the unethical overtures," he said.

He also suggested that "leaks" during investigations were "despicable".

In the transition between today's CBI and a truly autonomous CBI under a Lok Pal, the CBI should be able to say 'No, sir' or 'No, madam' to the politician giving it a "wrong signal, a wrong nod, a wrong pat or a wrong wink".

"I would even say, if a Lok Pal turns out to be made of the same common clay as politicians and becomes whimsical, capricious or tendentious, that day the CBI should be able to say the same 'No' to that august personage. And that is when partnership, transparent and strong, between the CBI and the people will strengthen it," he advised.

"We need an autonomous CBI, not a self-seeking behemoth. But the fear of such a monster should not be used to perpetuate the status quo," he said.

He said the CBI should be able to say another 'No' to in-service lollipops or a post-retirement cookie in the shape of a job.

He said the CBI officers need to be respected by the community and not held in some kind of awe or fear. "And respect has to be earned, not commanded," he said.