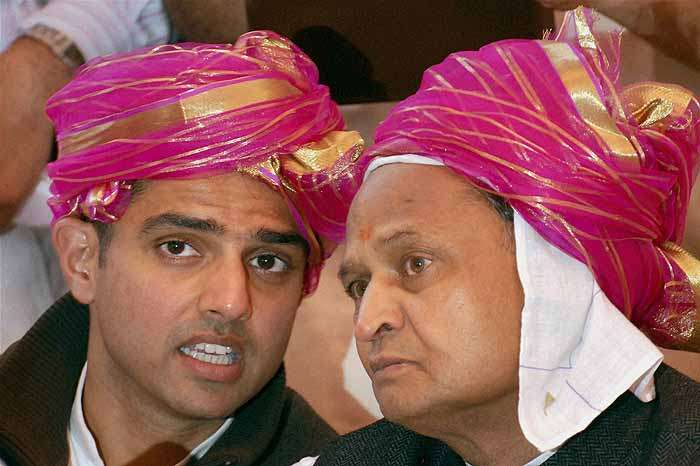 Rajasthan Congress Chief Sachin Pilot today termed the action of CBI of lodging a fresh FIR against him, former chief minister Ashok Gehlot and other Congress leaders in ambulance scam as a "meek, vendetta-driven malicious prosecution."

Gehlot also charged that the case was politically motivated and an attempt by Raje government to divert attention of people. "Can Raje and her son Dushyant get their allegation probed by CBI," he said.

Pilot, who was reacting after CBI re-registered today a case filed by Rajasthan Police to probe the allegations of scam in ambulance services, said the matter was being probed for quite some time "but they have not been able to make any headway".

"Their attempt to embroil me in this matter is purely a fabrication. I hope the probe is done swiftly and transparently.

"I have always stood for probity in public life and have upheld this standard in my own conduct. It's time that Raje government stopped going after political opponents and adopted a moral stand in their governance," he said.

He alleged CBI's action is on the prodding of Raje government and is nothing but a "meek, vendetta-driven malicious prosecution".

Pilot was named along with Gehlot and others in an FIR filed by Rajasthan CID in June last year. The case was transferred to CBI at the request of the state government.

Pilot has already sent a legal notice to former Mayor of Jaipur Pankaj Joshi, who was the complainant in the case, as the senior Congress leader said that he had resigned from the ambulance service provider when it became a "for-profit" venture.

"The company was established as a 'non-profit' venture and I joined the company because of tragic death of my father (Rajesh Pilot) in a road accident. Once they decided to convert it into 'for profit' venture, sometime in 2002, I quit as I told them I cannot be associated with it any longer," he said.

He said the resignation was tendered before he became MP in 2004.

"Chief Minister Vasundhara Raje is involved in serious corruption and this CBI case is aimed to divert public attention," Pilot alleged while saying that he would come clean in the investigation.