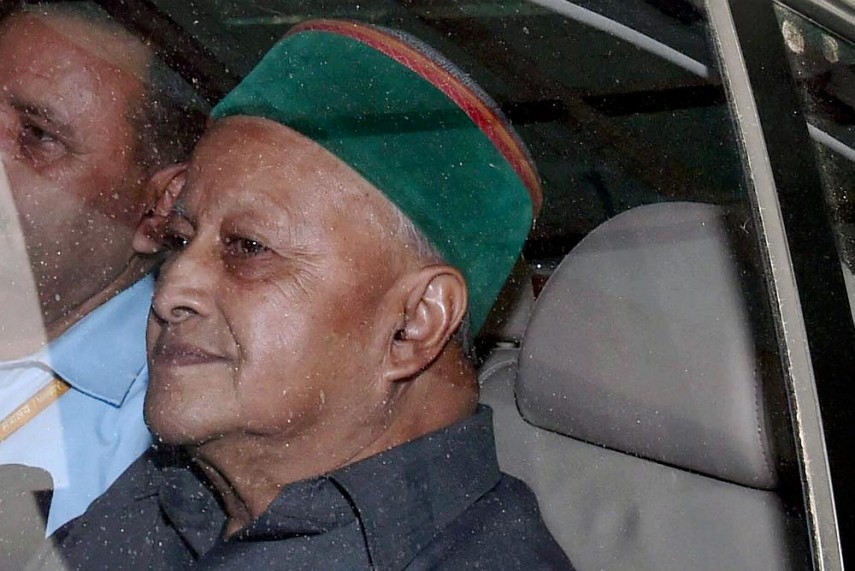 CBI has finalised its charge sheet in the disproportionate assets case against Himachal Pradesh Chief Minister Virbhadra Singh and his family members after its probe found that Rs 10 crore of ill-gotten assets were allegedly amassed during his stint as the Union Minister.

CBI, which had registered an FIR last year to probe allegations that Singh had allegedly amassed over Rs six crore of disproportionate assets, has concluded that the figure is around Rs 10 crore, the agency sources claimed today.

The agency had initiated an inquiry alleging that as Union Minister during 2009-2012 (UPA rule), Singh had accumulated disproportionate assets worth Rs 6.03 crore (approx) in his family members' name, CBI had said.

The allegations have been strongly refuted by Singh.

The findings of an year-long probe, which is almost complete, alleges that a complex web of investments, unsecured loans, property and share purchase besides false claims of agriculture income were used to camouflage the assets which were disproportionate to known sources of his income, CBI sources said.

They said the agency will soon move Delhi High Court seeking permission to file the charge sheet in the matter.

A detailed forensic analysis of documents and cyber forensic analysis of the computers of Singh's associates shows an alleged conspiracy in which money was purportedly routed through a complex web of shell companies into real estate investments as well, the sources claimed.

The FIR had named Singh, his wife Pratibha Singh, LIC agent Anand Chauhan and Chunni Lal Chauhan. The allegations have been refuted by Singh.

In a statement, the CBI spokesperson had said it was further alleged that Singh had invested his unaccounted income in LIC policies in his name and in the name of his wife and other family members through a private person by showing the same as agricultural income.

The CBI claimed an MoU was signed between Singh and Chauhan on June 15, 2008 for maintenance of an apple orchard for three years.

Chauhan had deposited Rs 5 crore (approx) in his own bank account and debited the same through cheques for purchasing various LIC policies in their names, CBI had alleged in FIR.

CBI now claims that Singh's wife Pratibha had given the money in cash to Chauhan to be invested in 11 LIC policies. Over eight policies worth Rs 4.4 crore matured from which a property was purchased in Greater Kailash worth over Rs five crore, the sources said.

Another associate of Singh, V Chandrasekhar, had provided Rs 80 lakh in the property purchase, CBI has now alleged.

The probe has found that the MoU was back dated through forgery in the stamp paper after they came to know about CBI probe into their assets, the sources claimed.

They said the investigations show that stamp papers which were used in the MoU were not even printed in 2008 besides the forensic analysis of stamp register shows that name of Anand Chauhan was inserted by overwriting on the stamp purchase register.

It was alleged in the FIR that Singh attempted to legitimise the same as agricultural income by filing revised Income Tax Returns in 2012 showing an increment from Rs 45 lakh, claimed in the ITRs of 2009-10, 2010-11, and 2011-12, to Rs 5.1 core in the revised Returns as earned from sale of apples from Srikhand Orchards to United Apple Associates, Pawanoo.

The probe has now found that the purported claims of Rs 5.1 crore being agriculture income from the sale of apples grown in Srikhand Orchard in Palampur was also false, the CBI sources alleged.

The agency got the orchard examined by experts of Indian Agriculture Research Institute who in their report said it could not have produced apples worth Rs 5 crore which were mentioned in the revised income tax returns of Singh, the sources claimed.

The forensic examinations of computers seized from United Apple Associates that accounts were allegedly tampered in 2013-14 to show the backdated payments of the apples, they said, adding that that examination also showed that payments were made for transport vehicles which were either two-wheeler or non-existent.

The sources claimed that probe has found that Pratibha was an active participant in the routing of allegedly illicit assets. It is alleged in the probe that she allegedly gave Rs 98 lakh in cash to businessman V Chandrasekhar for showing investment in his company Tarini Infrastructure.

It is alleged that the businessman got prepared demand drafts from three shell companies for showing purchase of shares worth Rs 98 lakh by them in his company.

Another element is purchase of a farm house worth Rs 1.2 crore by the son of the chief minister in Dera Mandi area here in 2011. To facilitate the purchase, Rs 90 lakh were allegedly transferred from Chandrasekhar to Singh while Rs 30 lakh were allegedly routed through a shell company, the sources said.

The agency has found that the farm house which Vikramaditya Singh was claiming to be mere agriculture land with boundary was was actually a furnished farm house with a swimming pool and out house, they said.

The sources also claimed that in her statement the woman who sold it in in 2008 to one Picheshwar Gade, from whom Singh had purchased in the property in 2011, had claimed that she had sold it for Rs 3.90 crore.

They said it shows that property was undervalued for at least Rs 2.7 crore to hide alleged disproportionate assets as property price was reduced by same amount for deal which took place three years later.

The sources said they have also found that Rs 3.90 crore were transferred from Chandrasekhar to Singh as "unsecured loan" for the repair of ancestral palace but the immediately investments were made in Fixed Deposits, immovable properties.

They said when asked about source of Rs 3.90 crore, Chandrasekhar had claimed that he earned through chilli and grain trade but these claims have allegedly found to be false.

It has emerged in the probe sale receipts were actually created on his own computers. Besides, the persons whom he claimed he entered in business reportedly refused to acknowledge any such business dealing with him.