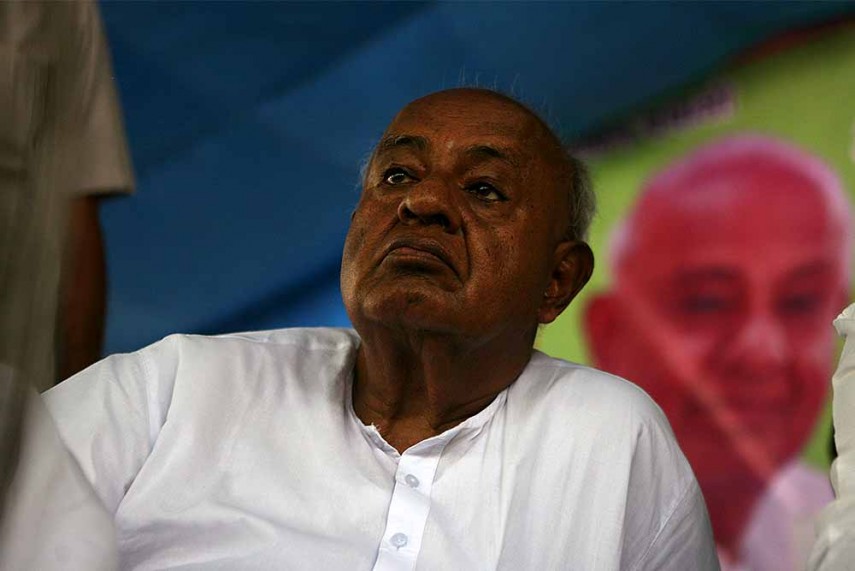 The 83-year-old Janata Dal (Secular) supremo is sitting on fast near the Mahatma Gandhi statue next to Vidhana Soudha, the state secretariat here.

Gowda's sudden decision comes in the backdrop of the Supreme Court order yesterday, asking Karnataka to release 6,000 cusecs of Cauvery water till October 6 to Tamil Nadu and the Centre to constitute the Cauvery Water Management Board.

"We want justice. Drinking water is essential for humans to survive," Gowda, a former Chief Minister, told reporters here, as he launched the hunger strike.

Asserting that he would continue his protest till Karnataka gets justice from the Union government, Gowda said he still has "confidence" in the Prime Minister that the issue will be resolved.

Gowda said he would not be attending the all-party meet called by Chief Minister Siddaramaia later today to chalk out the next course of action in the light of the apex court order, which came as a huge setback to the state.

Home Minister G Parameshwara, who visited Gowda, said the former Prime Minister had always fought for the state's interests and added, "I hope it (the hunger strike) will open the eyes of the judiciary."

He said the Attorney General agreeing in the Supreme Court to the formation of the Cauvery Water Management Board also showed that "it (Union government) is also against us".

Taking Karnataka to task for its repeated "defiance" by flouting its orders, the apex court had yesterday asked it to release 6,000 cusecs water from tomorrow till October 6 to Tamil Nadu, warning "no one would know when the wrath of the law" would fall on it.

A bench of Justices Dipak Misra and U U Lalit had also  directed the Centre to constitute the Cauvery Water Management Board by October 4.

Siddaramaiah is also holding a Council of Ministers meeting after the all-party meet.