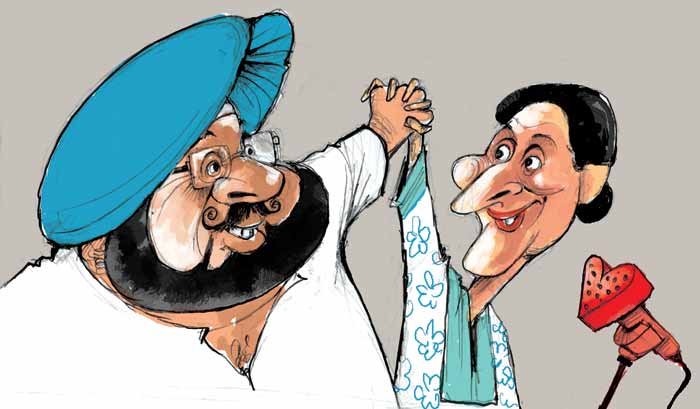 Fighting what he called was the "father of all battles", Amarinder Singh led the Congress to a stunning victory in Punjab decimating the SAD and crushing the AAP's dream of expanding its footprint beyond Delhi.

Belonging to a very rare breed of politicians who have seen action in the Indo-Pak war, Singh finally tasted success after Akali Dal supremo Parkash Singh Badal foiled his previous attempts to become chief minister - in 2007 and 2012.

The Congress stalwart could not have asked for a better gift on his 75th birthday.

Once a leader of the Akali Dal, the 'scion of Patiala' fought in the 1965 war after he rejoined the army a few months after his resignation. He again resigned from the Services as a decorated soldier at the conclusion of the war.

The Punjab Congress chief and husband of Patiala MP Parneet Kaur was born to late Maharaja Yadavindra Singh of Patiala.

After his initial schooling at Lawrence School, Sanawar and Doon School in Dehradun, he joined the National Defence Academy, Kharagwasla July 1959 and graduated from there in December 1963.

Commissioned in the Indian Army in 1963, he was posted in 2nd Bn. Sikh Regiment (both his father and grandfather had served this battalion), served in Field Area - Indo Tibetan border for two years with this battalion, appointed Aide-de-Camp to Lt Gen Harbaksh Singh, GOC-in-C Western Command.

His army career was for a brief period as he resigned in early 1965 after his father was appointed Ambassador to Italy and his services were required at home.

But he joined the army again immediately after hostilities broke out with Pakistan and took part in operations in the war only to resign again in early 1966 after the war was over.

His political career began in January 1980 when he was elected MP. But he resigned from the Congress and the Lok Sabha in protest against the entry of the army into the Golden Temple during "Operation Blue Star" in 1984.

After joining the Akali Dal in August 1985, Singh got elected to the Punjab Assembly on an Akali Dal (Longowal) ticket in the 1995 elections. He was Agriculture Minister in the Surjit Singh Barnala government.

However, Singh resigned from the cabinet in protest against the entry of paramilitary forces ordered by the Barnala government into the Golden Temple on May 5, 1986. He then floated the Panthic Akali Dal, which later merged with the Congress in 1997.

Singh unsuccessfully fought the parliamentary elections on a Congress ticket from Patiala in 1998.

In September 2008, he was expelled by a state assembly panel on allegations of irregularities in a land transfer case. In 2010, Singh got relief from the Supreme Court while held his expulsion unconstitutional.

He then went on to head the state Congress again till 2013.

Singh, a permanent invitee to the Congress Working Committee since 2013, fought the 2014 Lok Sabha elections from Amritsar and defeated senior BJP leader Arun Jaitley by a margin of more than one lakh votes.

He then resigned in November as MP after the Supreme Court termed Punjab's 2004 Act terminating the Satluj-Yamuna Link (SYL) canal agreement as unconstitutional.

A few days later, he was appointed president of the Punjab Congress again in the run-up to the polls.

A widely travelled person, Singh has penned several books including his memoirs of the 1965 Indo-Pak war.