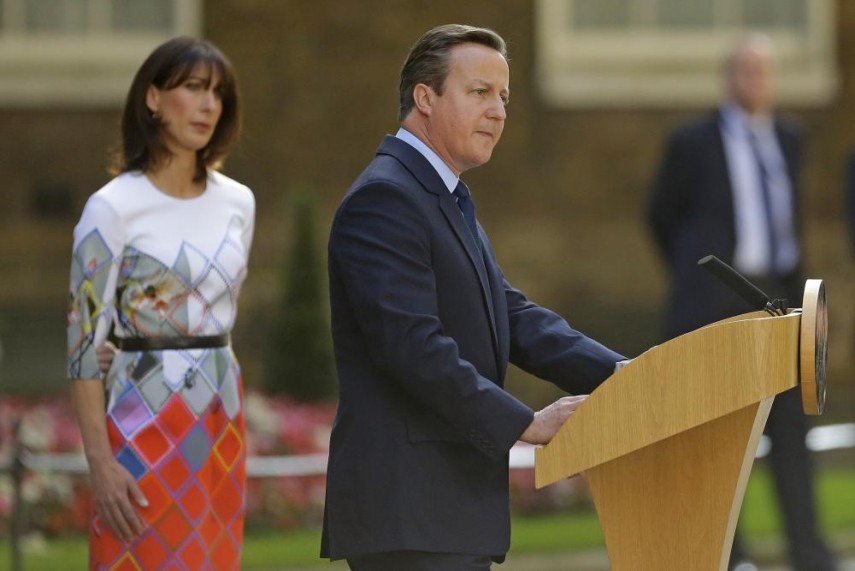 Outgoing British Prime Minister David Cameron today wished continued success for his country in its post-Brexit future as he left the Downing Street to meet Queen Elizabeth II to tender his resignation.

The outgoing PM was accompanied by his wife Samantha, who he described as the "love of my life" and thanked her for keeping him "vaguely sane", as well as his three children – Nancy, Arthur and Florence.

"I want to thank my children...For whom Downing Street has been a lovely home… no more boxes," he said outside the famous black door in London on drizzly Wednesday evening.

"It's not been an easy journey and of course we've not got every decision right. But today the country is much stronger; our economy is immeasurably stronger...For me politics has always been about public service in the national interest. It is easy to say but hard to do," the 49-year-old said before getting into waiting cars to be driven to Buckingham Palace to meet Queen Elizabeth II.

Cameron also made a reference to his successor, UK home secretary Theresa May, in his final speech, saying he wished her well and was proud that for the "second time in British history" the Prime Minister will be a woman and "once again a Conservative" – in reference to Margaret Thatcher as the first female PM of Britain.

He also reflected on the "spirit of service", which he said was "one of the most remarkable qualities" of the British character and praised the commitment of the armed forces and volunteers.

"As I leave for the last time, my only wish is for the continued success for this great country that I love so very much," he concluded, before the traditional waves and posing for family photographs outside 10 Downing Street.

In his last address to parliament, he said he would advice his successor that British trade, cooperation and security would be best served by a close relationship with Europe.

Cameron, who was given a standing ovation in the House of Commons, defended his achievements in office, saying there had been many "amazing moments" during his six years in power.

After he offers his own resignation, Cameron will recommend that the Queen as Britain’s Head of State invites Theresa May to take charge of the new government.

The Queen then invites May, who will be waiting in the wings to step in.

She is then expected to make her first official speech as British Prime Minister outside the same famous black door in London later on Wednesday evening.