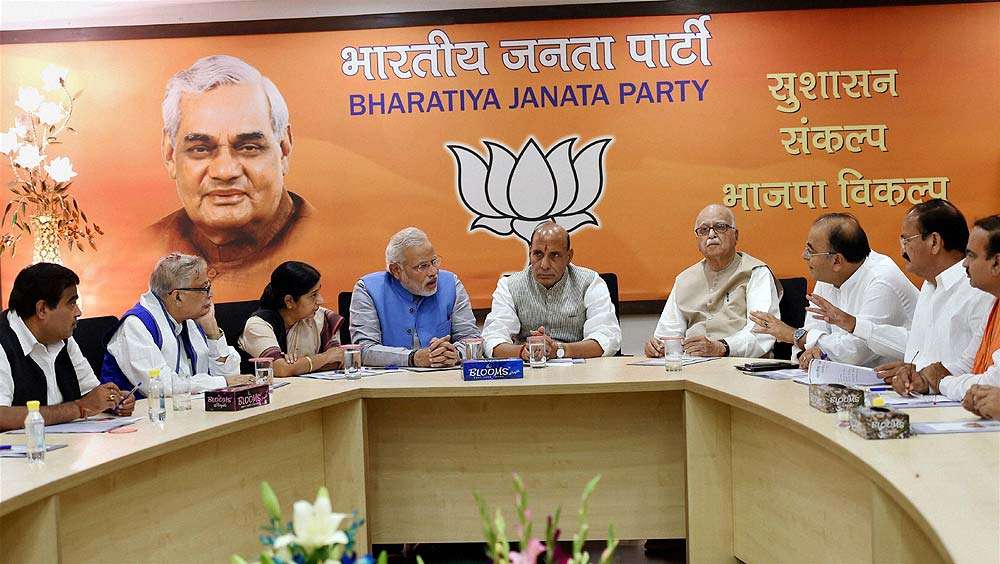 Print
A
A
A
increase text size
Outlook May 19, 2014 13:22 IST Cabinet Formation: Modi Meets Shah, Jaitley Among Others

Modi held the meeting at the Gujarat Bhawan here in Chanakyapuri with Shah and Jaitley, who is likely to be inducted in the Cabinet despite losing in the Lok Sabha elections.

Former UP CM and senior party leader Kalyan Singh also held discussions with Modi, who is likely to soon meet the leaders of his alliance partners, including Uddhav Thackeray and TDP representatives, BJP sources said.

Anupriya Patel of the Apna Dal, which is an alliance partner of the BJP in Uttar Pradesh, also met Singh. The NDA has won 73 out of the 80 seats in UP.

"Our alliance has swept Uttar Pradesh and nobody can ignore the importance of the state. The BJP chief has already said that the interests of the alliance partners would be safeguarded. So, there is no need for us to say anything else," she said.

After meeting RSS leaders, BJP spokesperson Prakash Javadekar said, "Tomorrow is parliamentary party meeting and all our MPs are coming and meeting the BJP president and the Sangh leaders. People have old ties and that is why they are coming here as well. The discussions are about tomorrow's meeting only and no other issue."

Javadekar, who also met the BJP chief, told reporters, "Only Modi and Rajnath Singh are holding discussions on that issue (of government formation) and other people are just meeting and greeting each other on the election victory."

BJP MP from Hamirpur in Himachal Pradesh Anurag Thakur said he had come to thank the RSS for its support. "BJP works independently and will continue to do so," he said.

The NDA's ally in Bihar and the Lok Janshakti Party chief Ramvilas Paswan, along with his wife, and son Chirag, also met Rajnath Singh at his residence.

"Neither I or Chirag has discussed anything about government formation or cabinet portfolio with either Modiji or Rajnath Singh. I think this is BJP's prerogative to decide who will get what post in the new government," Paswan said.

The meetings come a day after Modi reached out to party elders L K Advani and Murli Manohar Joshi as top leaders held parleys on the formation of the new government that will be sworn- in this week.