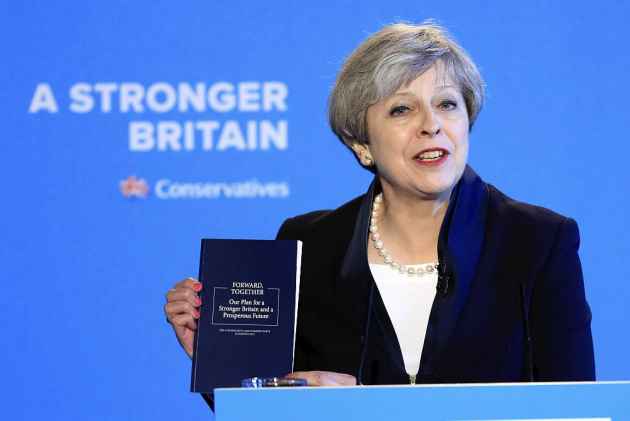 Print
A
A
A
increase text size
Outlook May 18, 2017 17:29 IST British PM Theresa May Makes Poll Pledge to Clamp Down on Immigration

Theresa May today unveiled her Conservative Party's election manifesto that makes cutting immigration from countries like India, a central poll pledge if her party wins the June 8 general election.

The British prime minister set out plans to further tighten rules for skilled workers from outside the European Union (EU), which involves anyone employing a non-EU worker to be expected to pay 2,000 pounds for each worker every year.

This amount doubles the "Skills Charge" of 1,000 pounds already in force.

Non-EU migrants will also be made to pay more for using the state-run National Health Service (NHS).

"It is right that we want to bring net migration down to sustainable levels because of the impact uncontrolled migration has on people and public services... We want to increase the Skills Charge because that money can then be put into training people here to be able to take those jobs while we still have a system that brings in the brightest and best into the country," May said, in response to questions after her manifesto speech at Halifax in the West Yorkshire region of England today.

The changes, viewed as the party's attempt to woo back voters who had swung towards the anti-immigrant UK Independence Party (UKIP) in the 2015 general election, are likely to hit Indians the hardest as they comprise of the largest number of skilled workers granted visas to live and work in the UK.

According to the most recent UK Home Office figures, Indian nationals accounted for 53,575 or 57 per cent of skilled work visas granted in 2016, with US nationals the next largest group at 9,348.

The Tory manifesto stresses a continued effort to "bear down on immigration from outside the European Union", including overseas students.

"We will increase the earnings thresholds for people wishing to sponsor migrants for family visas. We will toughen the visa requirements for students, to make sure that we maintain high standards," it reads.

"We will expect students to leave the country at the end of their course, unless they meet new, higher requirements that allow them to work in Britain after their studies have concluded."

Overseas students will remain in the immigration 55 statistics – in line with international definitions – and within scope of the government's policy to reduce annual net migration.

The Conservative party's tough stance on immigration reaffirms a previous pledge to cut net migration to the tens of thousands.

Net migration, the difference between people coming to the UK for more than a year and those leaving, stood at 273,000 in the year to last September.

It was last below 100,000 in 1997 and there had been some speculation if the party would choose to drop the "tens of thousands" target it has consistently failed to meet.

The manifesto also pledges to reduce and control immigration from Europe after Britain leaves the EU and is able to exercise its own border controls.

"Every vote for me strengthens my hand in Brexit negotiations," she added.

The manifesto launch is seen as May's attempt to highlight issues beyond Brexit and incorporates major changes to the country's social care system as well as efforts to pump in an extra 4 billion pounds into the schools system by 2022.

Universal free school lunches for infant pupils in England will be scrapped but free breakfasts will be offered across the primary school years.

The Tories have dropped another key party pledge from the past – a "tax lock" promised by former British Prime Minister David Cameron, committing to no increases in income tax and national insurance contributions.

"We must take this opportunity to build a great meritocracy in Britain. It means making Britain a country that works, not for the privileged few, but for everyone," she said, adding that her party's manifesto reinforces the Conservative stance as a "low tax party".

As well as the previously announced cap on energy prices, the manifesto also pledges to force mobile phone firms to make billing fairer, tackle rogue landlords and cut the cost of buying a home by cracking down on rip-off conveyancing and legal fees.

To tackle funding crisis in the care sector, wealthy pensioners will lose up to 300 pounds in winter fuel payments and more elderly people could be forced to pay to be looked after in their own homes.

The money saved by means-testing the winter fuel payment will go directly to fund health and social care.

The Tories claim their plans guarantee that no one, no matter how high their care costs, will have to sell their family home during their lifetime.

Workers will also be given the right to request up to a year's unpaid leave to care for a relative.

The Tory announcements today completes the launch of party manifestos by all major political parties in the fray in the June 8 election.

Voters have been offered extremely stark choices – with the Labour party’s strongly socialist-oriented pledges including re-nationalisation of key UK bodies like railways and postal system and the pro-Europe Liberal Democrats offering a second referendum on Britain's membership of the EU.