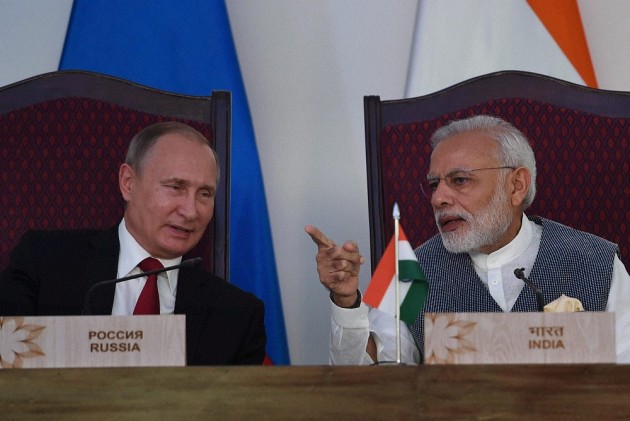 India today inked three mega defence deals with Russia that included purchase of a most advanced air defence missile system as part of 16 pacts even as the two traditional allies strongly pitched for "zero tolerance" in dealing with terrorists and their supporters.

Modi prefaced his remarks at a joint press event with Putin invoking a Russian proverb to drive home the point that "an old friend is better than two new friends," in a reflection of India's apparent unhappiness over Russia's recent joint military exercise with Pakistan.

Besides the purchase of 'gamechanger' S-400 Triumf long- range air defence systems from Russia at a cost of over USD 5 billion, the other two deals related to procuring four Admiral Grigorovich-class (Project 11356) guided-missile stealth frigates and setting up of a joint production facility for making Kamov helicopters.

The inking of these deals assumes significance since in in the recent past it was perceived that India, which had signed Logistics Exchange Memorandum of Agreement (LEMOA) with the US providing access to Americans to Indian military bases, was drifting away from its traditional defence ally, Russia.

"Russia's clear stand on the need to combat terrorism mirrors our own. We deeply appreciate Russia's understanding and support of our actions to fight cross-border terrorism, that threatens our entire region.

"We both affirmed the need for zero tolerance in dealing with terrorists and their supporters," Modi said.

The two leaders also discussed Uri attack by Pak-based terrorists during their "restricted talks" segment after which the Indian Side expressed its appreciation for Russia's unequivocal condemnation of the attack on army base in which 19 soldiers were killed.

Putin, on his part, said both countries have close cooperation in fighting terrorism.

India, which has conveyed its opposition to Russia undertaking joint military exercises with Pakistan, a country which "sponsors and practices terrorism as a matter of State policy", also said it was "satisfied" about Russia understanding of its interests.

"We are satisfied that Russia understand India's interest and they will never do anything contrary to India's interest and I think there was a strong meeting of minds on this subject," Foreign Secretary S Jaishankar said when asked about the Russian response to India's concern over the recent Pak-Russia joint military exercise.

Modi said the "highly productive" outcomes of the meeting clearly establish the special and privileged nature of strategic partnership between the two countries.

"They also lay the foundations for deeper defence and economic ties in years ahead. The agreements on manufacturing of Kamov 226T helicopters; constructions of frigates; and acquisition and building of other defence platforms are in synergy with India's technology and security priorities."

Modi and Putin also dedicated the unit two of Kudankulam nuclear power plant and witnessed foundation laying of its Unit 3 and 4.

A joint statement issued after their talks said the two sides noted with satisfaction "the progress in discussions on the General Framework Agreement and the Credit Protocol for Kudankulam Units 5 and 6 with a view to conclude these documents before the end of 2016."

Asserting that ties with Russia were "strong and time-tested", Jaishankar said the commercial pacts inked today will generate "unprecedented" investment and were an effort to "bring up to speed" the bilateral economic ties, which were lagging behind.

Asked why terror was becoming an important issue in BRICS, which is a body meant to deal with issues relating to economy and development, Jaishankar said the bloc has been discussing contemporary issues.

"Earlier they dealt with economic challenges and now terror is an important issue and BRICS has never shied away from discussing political issues," he said.

Modi said they have agreed to work on an annual military industrial conference that will allow stakeholders on both sides to institute and push collaboration.

"These projects are new chapters in a long history of strong and diverse defence partnership that both sides can take much pride in," he said.

He said, "We are working to model a partnership that befits our common ambition and meets our shared goals for the twenty-first (21st) century.

"Our close friendship has given clear direction, fresh impulse, stronger momentum and rich content to our ties. In the emerging regional and global landscape, it has been a source of strength and substance, a driver of peace and a factor of stability."

On cooperation in atomic sector, Modi said the dedication of Kudankulum 2 and laying of foundation concrete of Kundankulam 3 and 4 were examples of tangible results of India-Russia cooperation in the field.

"And, with proposed construction of another eight reactors, our wide ranging cooperation in nuclear energy is set to bring rich dividends for both of us. It also fits in with our needs of energy security, access to high technology and greater localization and manufacturing in India."

"And, with President Putin's support, we are ready and willing to expand the scope of our engagement further. We are also undertaking a joint study of a gas pipeline route between our two countries.

"A combination of robust civil nuclear cooperation, LNG sourcing, partnership in the Oil and Gas sector, and engagement in renewables can construct a promising 'Energy Bridge' between our two countries," he said.

The Prime Minister said the two countries also agreed to set up a Science and Technology Commission.

"Through this our societies will reap the benefits of joint development, transfer and sharing of cutting edge technologies in different fields," he said.

The joint statement said the two countries reaffirmed their continued commitment to work together towards development of energy efficiency and renewable energy source.

"Businesses and industry between our two countries are connected more deeply today. Trade and investment ties are on the upswing.

The Prime Minister said success of the Summit "shines a spotlight on the abiding strength of India-Russia strategic partnership.

"It also highlights our strong convergence of views and positions on pressing international and regional issues."

Modi said both he and Putin noted the similarity of views on the situation in Afghanistan and turmoil in West Asia.

"We also agreed to work closely to respond to the challenges posed by the unsettled nature of the global economic and financial markets. Our close collaboration at the United Nations, BRICS, East Asia Summit, G-20 and Shanghai Cooperation Organization makes our partnership truly global, both in its scope and coverage," he said.