Boyle's 'Slumdog' Rules at the Oscars 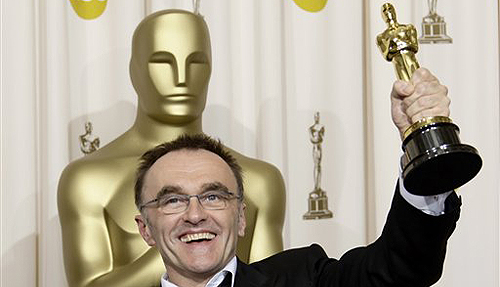 Danny Boyle's life story might not be as gripping as that of the protagonist Jamal from his Oscar winning movie Slumdog Millionaire, but the filmmaker has enough struggle written in to be called a 'rags to riches' story.

From his humble origins in a working class family to the glittering stage of the Academy Awards, Boyle has sure come a long way.

Boyle won his first ever Academy award after being adjudged the Best Director for his Mumbai-based potboiler Slumdog Millionaire.

The film reminiscent of Bollywood flicks with ample doses of romance, suspense and drama swept the award ceremony taking home the top honour for the Best Film of the year.

Boyle had won critical acclaim for his independent small budget flicks like Train Spotting and Shallow Grave, but it took the feel-good Indian saga Slumdog Millionaire for him to bag the much-cherished Oscar.

The film had already won Boyle a Golden Globe and a BAFTA for 'Best Director' along with the top award at the Director's Guild of America awards.

52-year-old Boyle has never shied away from unconventional subjects for his films be it junkies in Train Spotting, zombies in 28 Days Later or futuristic astronauts in Sunshine.

Then came Slumdog Millionaire, a heart-warming tale of a young urchin's struggle to find true love in the scathing underbelly of the city of dreams Mumbai.

Made on a shoe-string budget and with a newcomer cast, the film has achieved unexpected success, sweeping away all the major awards of the year, including a splendid crop at the mother of all award ceremonies, the Academy awards.

Boyle was born in 1956 in Radcliffe into a working- class Irish Catholic family. His parents had wanted him to join the clergy but he decided against it much to the gain of the world of cinema.

He began his career as a film director with the 1994 movie Shallow Grave after spending over a decade in the British theatre scene. The film was a psychological crime thriller which also marked the debut of actor Ewan McGregor.

Train Spotting, a film revolving around the life of a group of drug addicts in recession-hit England, brought repute for Boyle. The film developed a cult following and was at the 10th spot by the British Film Institute in its list of Top 100 all-time British films.

Meanwhile, Boyle's family including his father and twin sister Maria continue living in his native Radcliffe in the house where the now celebrated director grew up.