Bowlers Turn On Heat As India Beat Bangladesh By 208 Runs 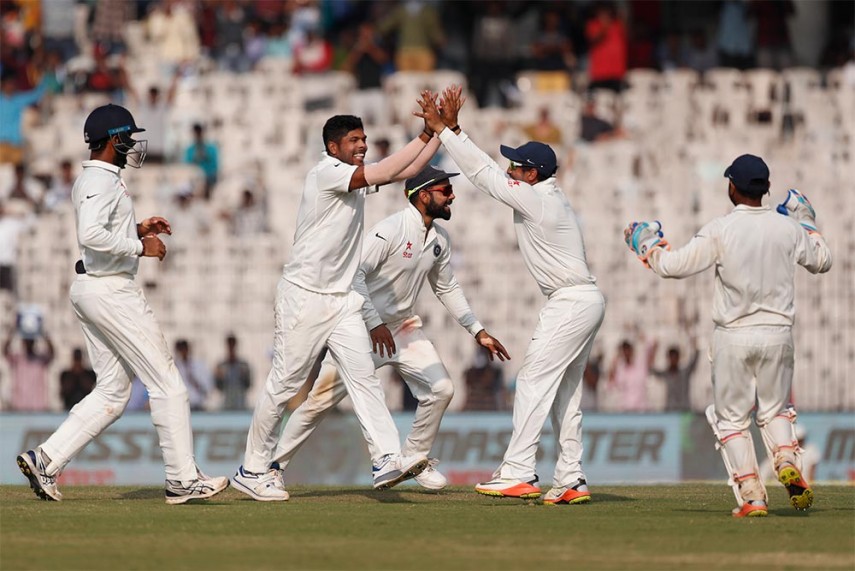 Indian bowlers showed tremendous perseverance on an unresponsive pitch to crush Bangladesh by 208 runs in the one-off Test and stretch the team's unbeaten streak to 19 matches, here today.

Chasing a daunting target of 459, Bangladesh were all out for 250 in 100.3 overs but put up a stiffer resistance than what the final outcome of the match would suggest.

The win was the Indian team's eighth victory in nine home Tests this season with the only draw coming against England at Rajkot.

This was India's the sixth successive series victory under Virat Kohli starting from Sri Lanka series in 2015. India's unbeaten streak in Test matches is now 19 with the last defeat coming against Sri Lanka in Galle back in August, 2015.

For a team ranked world No.9 in ICC rankings, Bangladesh hung on for four days and two sessions -- something that nobody had expected from the minnows. They played close to 230 overs, both innings included.

The Indian bowlers should be lauded for their collective effort as they had to show much more patience on a pitch that remained good for batting throughout the entire duration of the match.

Bangladesh needed to bat out 58 overs in the last two sessions to save the match but Ishant's brilliant post-lunch spell put paid to any hopes that the visitors had harboured.

It was as controlled an effort one would see with an old ball. He hit his conventional back of the length with an occasional fuller delivery and some good short stuff.

With little help from the pitch his spell was a laudable effort. One such well-disguised short ball aimed at Shabbir Rahaman's (22) body forced him to play a pull-shot which he top-edged to the only fielder, Bhuvneshwar Kumar standing at fine leg boundary.

He then bowled an in-swinger that looked like reverse to find Mahmudullah Riyadh (64) plumb in-front. With Mahmudullah's departure the writing was clearly on the wall for the visitors.

Mehedi Hasan Miraz again played 60 balls for his 23, was the eighth batsman out with Jadeja's delivery kicking up sharply to induce an outside edge snapped by Wriddhiman Saha.

Jadeja got his fourth when Taijul Islam (6) mistimed a pull-shot and was caught by KL Rahul.

There was no celebration from the Indian players apart from customary handshakes as a few players collected the stumps as souvenirs.

The fifth day pitch was still good to bat on even though the turn on offer was comparatively more than the last four days.

But Bangladesh batsmen, who play more limited-overs cricket, are not adept at saving Test matches, which is an art in itself.

In between, glorious shots and dead defence, there were moments of madness that became their undoing which showed why they need more experience at this level.

A better team on this flat track could have saved the Test match going in with seven wickets on the final day.

But as Kohli had pointed out before the game that one thing he has learnt is to be patient during dull phases of play.

Bangladesh may have fought well into the fifth day but India always had their foot firmly on the pedal throughout the entire duration of the match.

Not for once did it look that Bangladesh ever had any control of the proceedings.

Skipper Mushfiqur Rahim's (23) undesirable shot selection, in fact, would have frustrated the dressing room just when he was having a reasonably good partnership of 56 runs with Mahmudullah.

Some credit should be given to Ravichandran Ashwin, who cleverly altered the length after realising that both the Bangladeshi batsmen were using their feet to good effect.

Mushfiqur gave Ashwin the charge but failed to reach the pitch of the delivery trying to hit with the turn.

The ball ballooned up and Jadeja, standing at mid-off, back-pedalled a few steps to complete the formalities.

As Cheteshwar Pujara had indicated yesterday, the cracks had indeed opened up a bit and Jadeja reaped benefits. The left-arm spinner landed one on the rough that spun and jumped with Shakib (22) awkwardly fending it to Pujara at forward short leg.

Mahmudullah survived the anxious first half hour during which Umesh Yadav had squared him up but he managed to get a streaky boundary.

A top-edged boundary off Jadeja was followed by two exquisite strokes -- an inside out shot through covers and a swat to the cow corner off the next.

A square cut off Yadav showed why he is rated among the best stroke-players in Bangladesh.

He completed his half-century off 115 balls with his sixth boundary that flew through the vacant slip cordon off Yadav's bowling.

But he reasserted himself with a square cut off the next over.