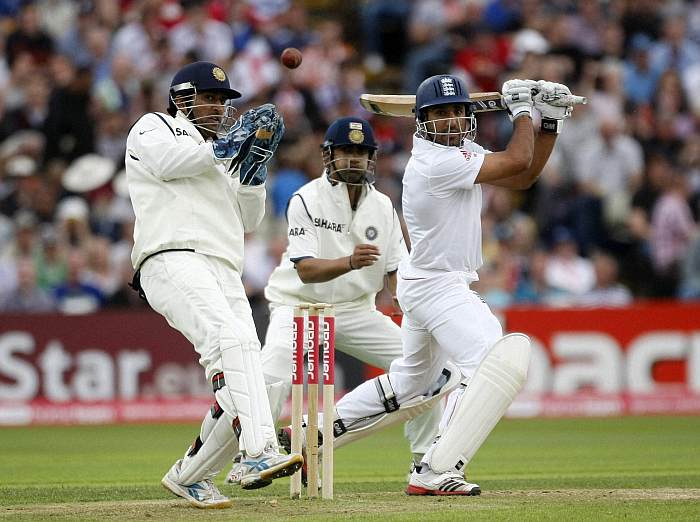 England's Ravi Bopara plays a shot as MS Dhoni looks on during the third day of the third test match at the Edgbaston Cricket Ground, Birmingham, England.
AP/PTI

"There comes a time when you have to make the transition from a promising player to a fully fledged international cricketer and that moment has arrived for Ravi Bopara. He is 26 now and is a senior player. He has to realise he is not a kid and deliver. He will never get a better chance against an Indian team with the wheels off," Vaughan wrote in his column for Daily Telegraph.

"His biggest challenge will be playing on the same pitch as his hero, Sachin Tendulkar. He has always tried to model himself on Sachin. But now he is playing a Test match against him and is going to have to admit he can't idolise the guy.

"He can't stare at every move he makes and say 'wow, look at Sachin'. As Test cricketers, you can't worship an opponent. It is a battle. It is you against them," he added.

Vaughan, taking a dig at the listless Indian bowling attack in the absence of injured Zaheer Khan, advised Bopara to stay at the crease for a longer period of time.

"Their attack is one of the easiest you could face, and without Zaheer Khan England could have picked another top six from county cricket and still done pretty well.

"I want to see Ravi have more of a presence at the crease in the way he plays, and not just by the way he walks. Ravi has to do is trust his game, technique and mental approach. His concentration has to be spot-on and not just when he bats. In the field he has to be on top of his game to show England he is a big boy now," said Vaughan of Bopara, who made a return to the Test side in place of injured Jonathan Trott.

Bopara made 178 against Leicestershire just over a week ago and the Essex batsman will bat at number six, with Ian Bell taking the place of Trott at number three.

Vaughan said the position suits Bopara as he had scored a hundred against the West Indies two years ago batting in that position.

"It will help Ravi that he is batting at six. Against the West Indies, he was batting in that position two years ago and little things like that can make you feel more comfortable when you are parachuted back into the team.

"Now that he has been given a chance and if he is successful it might be more than a one-off game to fill in for Jonathan Trott. Tim Bresnan showed at Trent Bridge what can happen if you perform. If Ravi makes 150 he can't be dropped, especially if Eoin Morgan struggles," he said.

Vaughan advised Bopara to quickly sort out his weakness against the rising delivery in order to make an impression for England.

"The bouncing ball has sorted Ravi out in the past. If you can push him back in his crease he starts to feel for the ball around about the fourth stump (an imaginary channel outside off-stump). He does not quite get his head over his front pad at first and, as it is for most players, the ball slanted across and nipping back in is a problem," Vaughan said.

"When he arrives at the crease under pressure at Edgbaston he just has to get his head over his front pad early and work out where the off-stump is. It helps to leave a few early on and not chase the ball," advised Vaughan.

Trailing 0-2, India, after being all out for 224 in the first innings, saw England stretch their lead to 232 on day two of the third Test at Edgbaston and Vaughan said it's hard to see the visitors having a chance this week.

"I just hope they can show a bit more fight and Dravid-like determination throughout the team in their batting, bowling and fielding. We want to see more of a contest and India play better," he added.