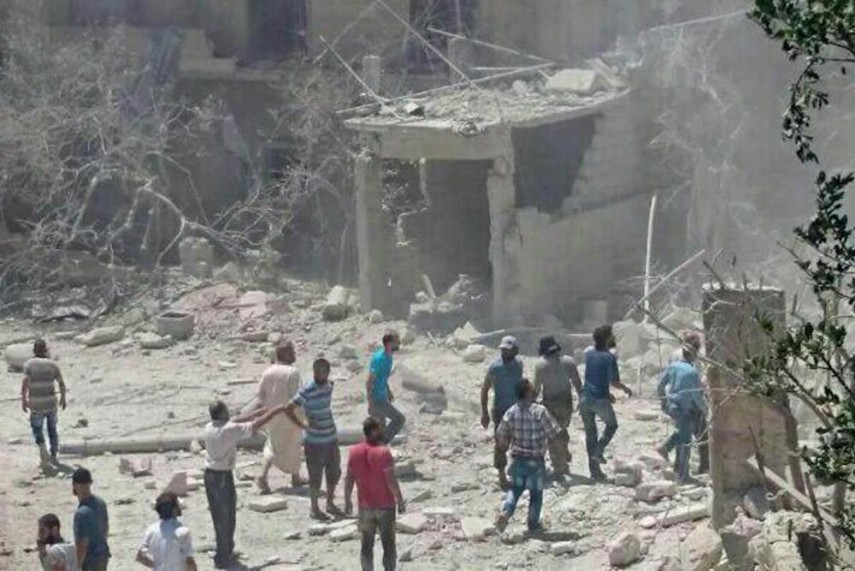 Bombs rained down on rebel-held eastern Aleppo for a second straight day, pounding a district that houses several medical facilities, including the central blood bank, and forcing Syrian staff and patients in the only remaining paediatric hospital to cower in a basement as buildings collapsed around them.

At least 54 people were killed in airstrikes and artillery shelling across northern Syria, part of a long-anticipated offensive against rebel-held areas announced by Russia, a key ally of Syrian President Bashar Assad.

The bombardment hit in besieged neighbourhoods of Aleppo, as well as the surrounding countryside and the nearby rebel-held province of Idlib.

Russia said its air raids were only targeting Idlib and the central province of Homs to root out militants of the Islamic State group and Syria's al-Qaida affiliate. But Syrian warplanes were pounding rebel-held districts of Aleppo, home to nearly 275,000 people.

Syria's Civil Defence, known as the White Helmets, recorded at least 150 raids, more than double the number of attacks on Aleppo on Tuesday.

Resident Modar Shekho said warplanes hadn't left the skies over his neighbourhood since 9 AM (local time).

"The helicopters would leave and the jets would arrive," he said by telephone, adding that the helicopters were dropping seven or eight "barrel bombs" at a time "causing a lot of destruction."

The head of the only paediatric hospital still in service in eastern Aleppo described taking shelter in a basement with some 50 young patients and staff for more than two hours as the crude unguided explosive- and shrapnel-laden bombs and other missiles fell around them.

"It was frightening," said Hatem, who gave only his first name out of fear for the security of family members living in government-controlled areas. He said he counted more than 20 missiles falling, and a number of nearby buildings were destroyed.

When he and the others emerged, he said they found missiles had landed in the hospital's courtyard, hit the main door and stairs. The hospital's operating rooms, incubators and other equipment were moved underground four months earlier because of repeated aerial bombings of the city.