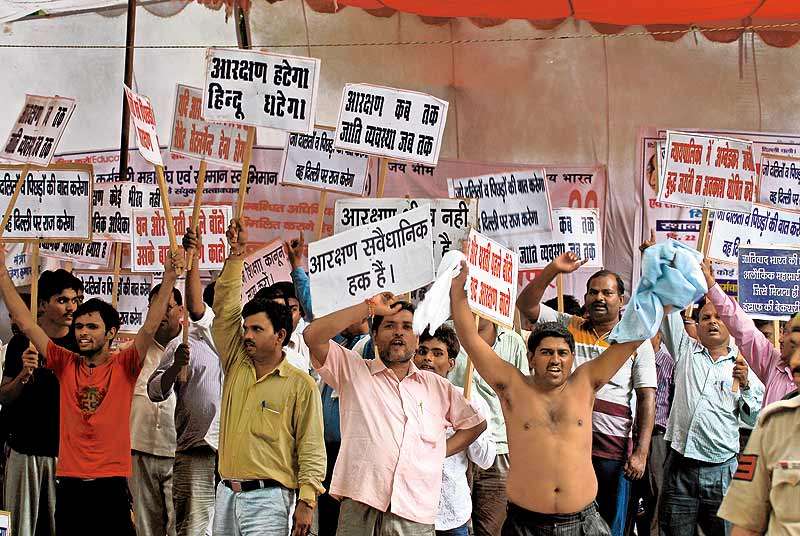 The Bombay High Court today stayed implementation of the controversial decision of the erstwhile Congress-NCP government in Maharashtra to provide reservation to Marathas in government jobs and educational institutions announced ahead of the state Assembly election.

It also stayed the decision to provide five per cent reservation to Muslims in government service but allowed quotas for them in educational institutions.

Admitting a batch of Public Interest Litigations, a bench headed by Chief Justice Mohit Shah said the Supreme Court had already laid down the law for reservation which cannot exceed 50 per cent of the total seats.

52 per cent seats in government jobs and educational institutions were already reserved for the targeted groups and the Congress-NCP government had, in the run up to the Assembly poll, raised it to 73 per cent by announcing 16 per cent quotas for Marathas and five per cent for Muslims.

The court was of the view that the comparative data provided by the government justified its decision to introduce reservation for Muslims in government educational institutions. It, however, excluded private educational bodies from the purview of reservations for the minority community.

The government defended its decision on reservation to Marathas and Muslims contending that the two communities were socially and educationally backward and also economically poor. It said the decision was based on the report of a committee headed by former minister Narayan Rane set up to look into the issue.

The government said it had taken into consideration recommendations of Rajinder Sachar Committee and Mahmoodur Rahman Committee, both of which had recommended reservation for Muslims, while arriving at the decision to provide quotas for them.

The PILs challenging reservation for the two communities were filed by social activist Ketan Tirodkar, an NGO Youth for Equality, Anil Thanekar, I S Gilada of Indian Health Organisation and others.

Senior advocate Pradeep Sancheti, appearing for Youth for Equality, referred to the Supreme Court's guidelines on reservations which said it cannot exceed 50 per cent of the total seats.

He also contended that it cannot be granted on the basis of religion.

Sancheti said the state government had not provided comparative data about population and backwardness of Muslims and Marathas vis-a-vis other communities. He questioned the government's decision to introduce reservations "in a hurry" when Assembly elections were due.

Tirodkar and other petitioners, opposing the reservations, argued that Marathas and Muslims were not backward Communities.

Tirodkar contended that 75 per cent of cooperative sugar factories and as many of educational institutions in Maharashtra were controlled by Marathas. Also, they owned nearly 75 per cent of the land in the state.

Citing a report of the National Commission for Backward Classes in year 2000, he said Marathas were socially advanced and thus cannot be included in the list of backward classes.

He said the Commission, while rejecting the claim of Marathas for inclusion in the list of backward classes, said they had played a pioneering role in shaping socio-cultural and political history of modern Maharashtra and had been in the forefront of many spheres of the state's development.