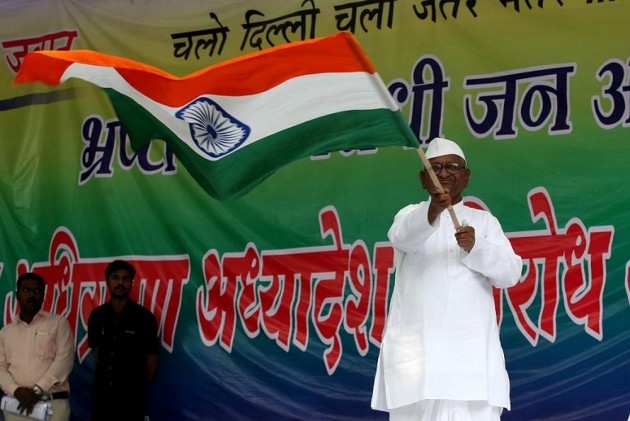 Print
A
A
A
increase text size
Outlook January 06, 2017 17:10 IST Bombay HC Refuses To Order CBI Probe 'At This Stage' On Hazare's Plea In 'Sugar Scam'

The Bombay High Court today refused to order a CBI probe on activist Anna Hazare's plea into the the alleged sugar cooperative factories scam involving Rs 25,000 crore in which he has named politicians including NCP President Sharad Pawar and his nephew Ajit Pawar.

The court asked Hazare to first file a police complaint and said it could not order a CBI inquiry "at this stage".

"First file a police complaint based on your allegations and if they (police) refuse to register it, then approach their higher authorities and even if that does not work out then come to us.

"At this stage, we would not order a CBI inquiry... You are asking for a CBI probe without even the offence being registered by police. How can you ask for transfer of probe when offence has not been registered ?," asked the high court.

As Hazare's counsel sought time to register a police case, the bench adjourned the matter to February 13.

The court was hearing a criminal PIL filed by Hazare seeking CBI inquiry into the sugar co-operative factories scam and a probe by Special Investigating Team into the alleged role of politicians.

Hazare has filed two more civil PILs on the same issue which are expected to come up for hearing in due course.

The petitions alleged that fraud had been committed in governance by first burdening sugar co-operative factories with debts and thereafter selling these sick units at a throw away price, causing loss of Rs 25,000 crore to the government, cooperative sector and members of public.

The petitions also prayed to appoint a court receiver to take possession of all the properties held by persons against whom a prima facie case exists in the alleged scam.

The petitions name Sharad Pawar and his nephew and former Maharashtra Minister Ajit Pawar as respondents.

The petitions also demanded setting up of a Commission of inquiry to probe the alleged illegal sale of sugar cooperative factories in Maharashtra either by the government or the cooperative banks.

The petitions demanded an inquiry by CBI into allegations of corruption and misuse of government and cooperative funds in the scam involving lease and sale of co-operative sugar factories in Maharashtra which caused a loss of Rs 25,000 crore to the exchequer.

The petitioner stated that the statistics and facts mentioned in the petition have been collected from authorities through Right to Information Act.

Hazare pleaded that "the scam" had engulfed the entire state and pulled it back by nearly 50 years causing losses to the government and putting the state under financial debt to the tune of hundreds of crores of rupees.